"It’s looking like some of these frogs may not be around by the time my kids are old enough for me to take them to Cameroon to see them," herpetologist David Blackburn said. 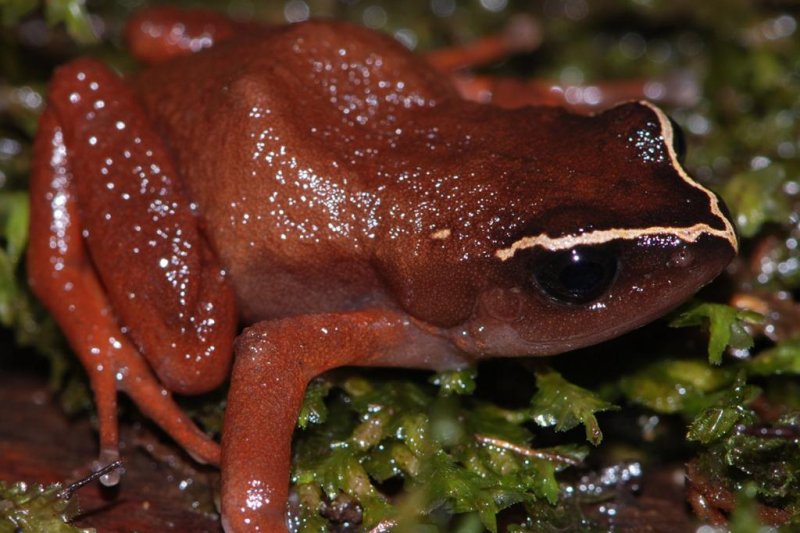 Cameroon's bright red Cardioglossa manengouba is now scarce where it was once abundant, due in part to deadly fungus, researchers found. Photo by Mark-Oliver Rodel

GAINESVILLE, Fla., May 6 (UPI) -- A deadly fungus has wiped out entire species in Australia, Panama and Madagascar. Now, it's threatening frogs in Africa.

According to a new study published in the journal PLOS ONE, the threat looms largest in Cameroon, one of the continent's most important biodiversity hot spots. Cameroon's wet, warm climate hosts roughly half of all species in Africa, including dozens of unique frog species.

"There's been this perception that frogs in Africa are not affected by chytrid at all, but we have evidence of the disease in some animals," study co-author David Blackburn, University of Florida herpetologist, said in a news release. "This is the first real case of a decline across multiple amphibian species in Africa."

Blackburn and his research partners at Berlin's Humboldt-Museum tracked frog biodiversity and abundance on two Cameroon mountains, Mount Oku and Mount Manengouba, over the course of 12 years -- including time both before and after the emergence of chytrid fungus, Batrachochytrium dendrobatidis.

Blackburn and his colleagues documented several instances of fungus infections and measured population declines linked to the emergence of the deadly fungus. Several once-abundant species, including the bright red Cardioglossa manengouba, are now difficult to find, Blackburn said.

"It's looking like some of these frogs may not be around by the time my kids are old enough for me to take them to Cameroon to see them," he said.

The story of frog versus fungus is one told on nearly every continent. Amphibians face battles with disease and parasites in Australia, Europe, Latin America, North America and elsewhere. But recent studies suggest climate change is exacerbating the problem.

Because small amphibians like salamanders and forest frogs tend occupy niche ecosystems, they're especially vulnerable to change and environmental stress.

While scientists have developed vaccines that make captured frogs less vulnerable to chytrid, such solutions aren't practical -- especially in remote places like the forests of Cameroon.

"Even if a cure was found, it would be hard to inoculate all of the individual frogs out there," Backburn said. "Promoting a healthier environment in general for Africa's amphibians in terms of water quality and habitat protection is our best shot for keeping these species around."