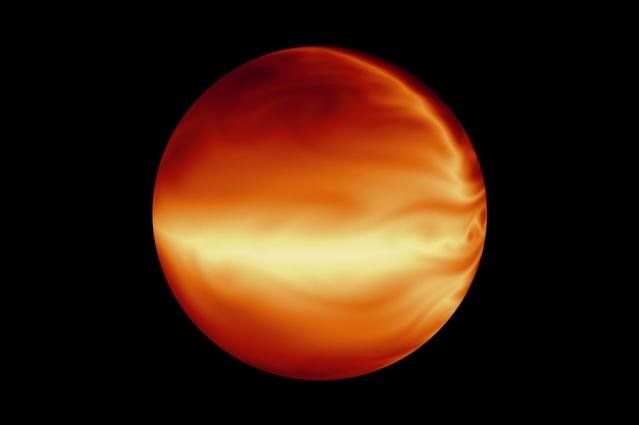 Researchers have found a hot Jupiter with an oddly-shaped comet-like orbit around its host star. Photo by NASA/JPL

BOSTON, March 28 (UPI) -- Researchers have found an alien world unlike any other -- a "hot Jupiter" with an oblong, comet-like orbit.

Hot Jupiters are gas giants with a size and composition comparable to Jupiter, but with a more Earth-like orbit around its host star. Its proximity to its star is what makes it hot.

Though early astronomers assumed most solar systems looked like ours -- rocky planets on the inside, cooler gas giants farther out -- planetary scientists have since discovered several hundred hot Jupiters.

The planet is roughly the same size as Jupiter but four times as massive. It orbits a star in the constellation Ursa Major, 190 light-years from Earth.

During the exoplanet's relatively short orbit, the gas giant spends 100 days boomeranging unusually far from its host star. When it returns, it doesn't sling out wide again on the other side, but hugs a tight turn that lasts just 20 hours.

During its intimate approach, HD 80606 b absorbs tremendous amounts of energy from its star.

"If the Earth were to be moved that close to our sun, it wouldn't take long for it to lose its atmosphere and turn its surface to magma," Julien de Wit, a postdoctoral researcher in MIT's Department of Earth, Atmospheric and Planetary Sciences, said in a news release.

Surprisingly, all that heat dissipates rather quickly. Within 10 hours of its close swing by the star, HD 80606 b cools enough to disappear from the view of NASA's Spitzer Space Telescope.

Researchers believe hot Jupiters are born far from their host stars and later pushed closer by neighboring stars. As they are pushed inward, their gravity compresses the planet's gas. The compression squeezes out energy in the form of heat and takes a bit of steam out of the planet's trajectory. Over time, this deceleration allows the planet to assume a more typical circular orbit. The process is called "circularization."

Scientists assumed circularization happened relatively quickly and that most hot Jupiters were easily compressed -- or squishy.

However, HD 80606 b isn't all that squishy, and the computer model suggests it will maintain its oblong orbit for at least 10 billion more years.

Researchers say their work -- detailed in the journal Astrophysical Journal Letters -- calls the theory of hot Jupiter formation into question.

"This system is undoubtedly very unique as it seems to challenge in many ways our understanding of planet-star interactions and planet formation," de Wit says. "Hopefully, future studies of similar systems will help us evaluate how special this system is and how far off our initial theories were."

Science News // 6 hours ago
Plastic particles proliferate globally, spread by ocean waves and through the air
April 12 (UPI) -- New research highlights the ways microplastic can become airborne, transported across the continents and deposited across the globe.