"The result was a surprise," said astronomer Antonino Lanza. 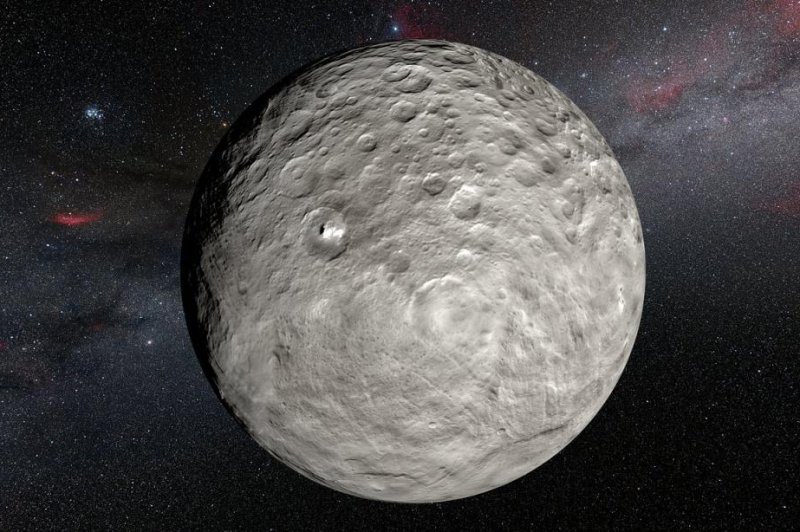 A rendering reveals a few of the Ceres bright spots first discovered by NASA's Dawn spacecraft. Photo by ESO

New data collected by the European Southern Observatory's La Silla Observatory in Chile show Ceres' bright spots get brighter during the day and exhibit other measurable variations. Researchers believe some of the bright spots' material sublimates in the midday sun.

Ceres is a dwarf planet and the largest object in the asteroid belt running between the orbits of Mars and Jupiter.

Since imaging it in detail for the first time last year, astronomers and citizen scientists have been captivated by the dwarf planet's bright spots, various points that reflect much more sunlight than the surrounding terrain. Researchers believe the spots are composed of salts or ice.

The latest discovery was made possible not by a space-based probe, like NASA's Dawn craft, but by ground telescopes.

"As soon as the Dawn spacecraft revealed the mysterious bright spots on the surface of Ceres, I immediately thought of the possible measurable effects from Earth," astronomer Paolo Molaro, a researcher at the Trieste Astronomical Observatory in Italy, said in a news release. "As Ceres rotates the spots approach the Earth and then recede again, which affects the spectrum of the reflected sunlight arriving at Earth."

But calculations confirmed the act of rotating away from or toward the Earth is not enough to explain the changes detailed by the observatory's HARPS spectrograph. Thus, astronomers concluded the spots themselves are changing over the course of each day on Ceres.

"The result was a surprise," added Antonino Lanza, an astronomer at the Catania Astrophysical Observatory. "We did find the expected changes to the spectrum from the rotation of Ceres, but with considerable other variations from night to night."

The latest findings were published this week in the journal Monthly Notices of the Royal Astronomical Society.

Science News // 1 hour ago
'Cannibal' solar burst headed for Earth could make northern lights visible in U.S.
Aug. 18 (UPI) -- A plume of "dark plasma" from the sun is expected to be overtaken by a "cannibal" solar burst that may cause an aurora display visible throughout large portions of the United States on Thursday.

Science News // 14 hours ago
Spacewalk cut short by equipment failure
Aug. 17 (UPI) -- A Russian astronaut's spacewalk outside the International Space Station was cut short Wednesday after experiencing an electrical problem with his suit.

Science News // 18 hours ago
Northern lights could glow over northern U.S.
Wednesday night will feature the rare opportunity to see the glow of the aurora from the United States, but cloudy conditions could obscure the sky during the height of the celestial light show.

Science News // 18 hours ago
National Academy of Sciences sanctions White House climate official for ethics violation
Aug. 17 (UPI) -- The U.S. National Academy of Sciences has sanctioned White House official Jane Lubchenco, and barred her from working on publications or programs for the academy for five years, for violating its ethical code of conduct.

Science News // 21 hours ago
NASA's Artemis 1 rocket completes prelaunch rollout
Aug. 17 (UPI) -- NASA's Space Launch System rocket completed its rollout to the launch pad Wednesday at Kennedy Space Center in Florida, ahead of an uncrewed flight later this month and future plans to send humans back to the moon.

Science News // 22 hours ago
Moon, Mars to make celestial rendezvous in early-morning sky
Saturn has been a popular planet for stargazers this month as it reached its peak brightness on Sunday, but astronomy fans' attention will shift to another easy-to-spot planet on Friday: Mars.