He even had time for some monkeying around.

A year is a long time, but it probably flies by while you're zipping 250 miles above Earth, orbiting about 15 times each day.

NASA astronaut Scott Kelly and Russian cosmonaut Mikhail Kornienko, both veteran space travelers, launched aboard Soyuz TMA-16M from the Baikonur Cosmodrome in Kazakhstan on March 28, bound for the International Space Station. The pair are scheduled to return to Earth on March 1 on Soyuz TMA-18M.

Part of NASA's Human Research Program, the One-Year Mission on the ISS is a joint effort between the U.S. space agency, the Russian Federal Space Agency (Roscosmos) and international partners. It's part of a research project studying long-term spaceflight and the effects it has on the human body.

Here are 12 awesome things that Kelly and Kornienko experienced during their time orbiting Earth.

1. You get to work on your selfie game while orbiting 270 miles above the Earth's surface

Great work by the whole team yesterday and a brief moment to take a #selfie! #spacewalk #YearInSpace pic.twitter.com/4XNf2fpkul

2. You have a Twitter conversation with Tim McGraw about his new song, Top of the World, while literally standing on top of the world.

.@TheTimMcGraw Maybe! Let me know where. Appreciate your support from #TopOfTheWorld on @Space_Station! #YearInSpace pic.twitter.com/b1GTnfxKiA

3. You get to share a meal with friends. Every. Single. Day.

We're fewer at dinner tonight as three of our friends await to return to #Earth https://t.co/pAXzZ4RU9w #YearInSpacehttps://t.co/bMjwmqLJ7l

4. How many other people can watch movies about space in space?

Watched @MartianMovie on @Space_Station last night! Today working towards our #JourneyToMars during my #YearInSpace! pic.twitter.com/rIEBjFxRIr

#Movie night in micro #Gravity aboard #ISS on our new HD projector which we use for conferences, tech software, etc.. pic.twitter.com/Mhb03U3alz

5. You give yourself a flu shot in microgravity while your twin brother gives himself one on Earth. 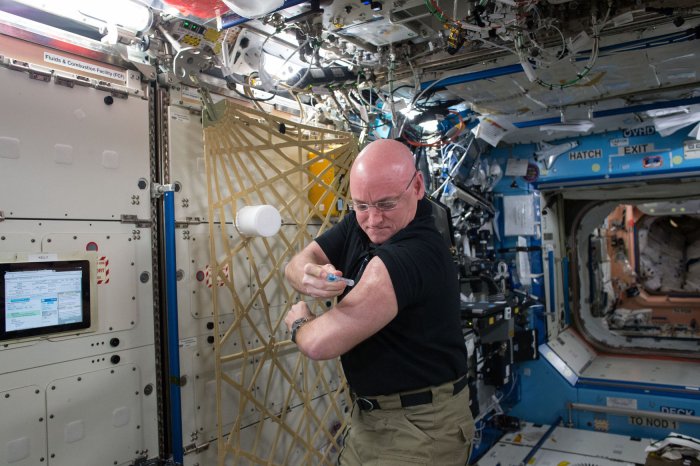 The vaccinations are part of NASA's Twins Study, a compilation of multiple investigations that take advantage of a unique opportunity to study identical twin astronauts Scott and Mark Kelly, while Scott spends a year aboard the International Space Station and Mark remains on Earth.

6. You talk space and do somersaults with the House Science Committee.

7. One year in space gives you ample time to brush up on your horticulture skills.

It was one small bite for man, one giant leap for #NASAVEGGIE and our #JourneytoMars. #YearInSpacehttps://t.co/B7Gkfm1Vz0

The challenging process of growing both lettuce, as well as zinnias, in microgravity, helps provide NASA with invaluable information when it comes to long term spaceflight and self-sustaining space farming.

A zinnia plant pillow floats through the U.S. Destiny Laboratory aboard the International Space Station on Jan. 22. NASA/UPI
8. You pretend you're a character in Star Wars while re-docking a Soyuz capsule.

9. You celebrate 300 days in space with the only other person that knows what you're going through.

"My one-year crewmember Misha Kornienko and I on day 300 aboard @space_station! #YearInSpace"

10. You take time to remember the sacrifices of those who made what you do possible.

Remembering the sacrifices of the Apollo 1, Challenger and Columbia crews from @space_station today. #NASARemembershttps://t.co/H2ftIgTb7O

11. Occasionally a very special VIP will hijack a video chat with your family just to see how you're doing.

12. You monkey around to "Yakety Sax" as your #YearInSpace draws to a close.

Um, @StationCDRKelly, I thought you said you had things under control up there on @Space_Station? #ApeInSpace pic.twitter.com/wYu1auoA6W