"Using fish sauce as a partial replacement for salt in food preparations may be a delicious and creative alternative for many low sodium diets," researchers said. 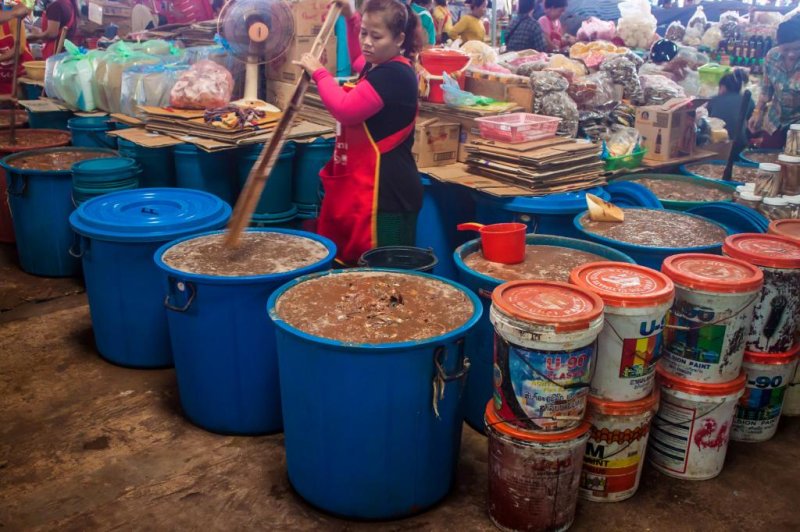 Fish sauce is made by fermenting sea salt with long-jawed black anchovies for 8 to 12 months in large vats. Pictured, fish sauce is prepared in a market in Pakse, Laos. Photo by Matyas Rehak / Shutterstock

SUBANG JAYA, Malaysia, Feb. 2 (UPI) -- If you've ever had low-sodium soup out of a can, you can understand why scientists might be looking for a more flavorful way to reduce sodium levels.

Salt, of course, is the world's preeminent flavor enhancer. But too much sodium can lead to high blood pressure.

Fish is a common condiment and ingredient used in Southeast Asian cooking made by fermenting sea salt and long-jawed black anchovies for several months. The resulting liquid is prized for its pungent umami flavor.

Researchers from Taylor's University in Malaysia used Vietnamese fish sauce in a number of sauce preparations common in restaurants and on grocery aisle shelves around the world -- chicken broth, tomato sauce and coconut curry. They found the fish sauce allowed chefs to reduce sodium levels without sacrificing flavor.

Researchers published their findings in the Journal of Food Science, published by the Institute of Food Technologists.

"Consequently, using fish sauce as a partial replacement for salt in food preparations may be a delicious and creative alternative for many low sodium diets."