Lab-bred corals reproduce in the wild, a first

SECORE's efforts are just one of many coral restoration projects going on around the world, but its techniques for coral regeneration make it unique. 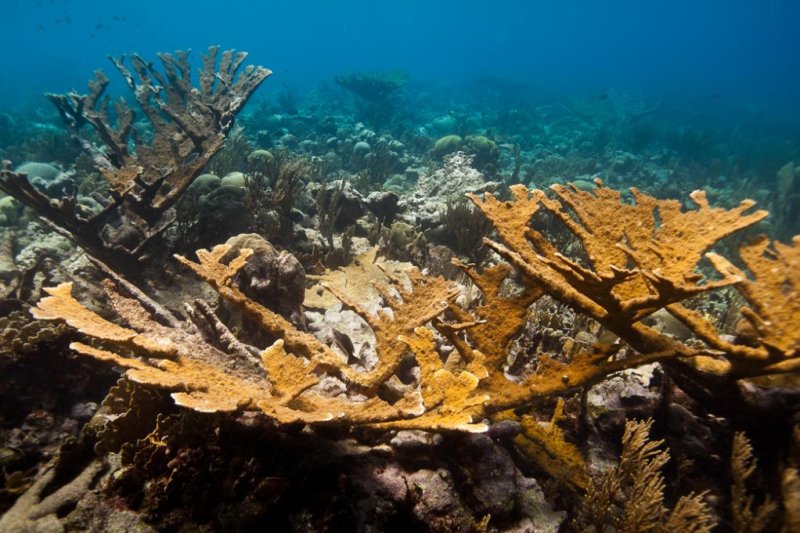 A colony of elkhorn coral in the wild. Photo by SECORE

AMSTERDAM, Netherlands, Jan. 29 (UPI) -- Rising ocean temperatures are a significant threat to coral. Perhaps second only to phytoplankton, healthy coral communities are one of the most vital components of marine biodiversity.

But coral research has mostly produced bad news recently. Over the last four decades, as much as 80 percent of all coral in the Caribbean has disappeared.

There is a bit of good news, however. For the first time, coral raised in a lab has been successfully integrated into a wild population and reproduced on its own.

"In 2011, offspring of the critically endangered elkhorn coral (Acropora palmata) were reared from gametes collected in the field and were outplanted to a reef one year later," Valerie Chamberland, a coral reef ecologist working at non profit conservation group SECORE, said in a news release.

"In four years, these branching corals have grown to a size of a soccer ball and reproduced, simultaneously with their natural population, in September 2015," Chamberland continued. "This event marks the first ever successful rearing of a threatened Caribbean coral species to its reproductive age."

SECORE's efforts are just one of many coral restoration projects going on around the world, but its techniques for coral regeneration make it unique.

Most coral conservation efforts involve what's called coral gardening, whereby small fragments of coral and taken and cared for in the lab. After growing to a healthy size, they are replanted on the reef. This limits the expansion of genetic diversity, as the same gene combinations are added back to the coral community.

SECORE scientists, with the help of researchers from the University of Amsterdam and the Carmabi Marine Research Station in Curacao, have developed a technique for producing coral embryos using vitro fertilization in the lab.

The embryos develop into mobile larvae, which eventually take up residence in a substrate. The maturing substrates are then replanted on the reef.

The latest evidence, detailed in the journal Global Ecology and Conservation, prove their method is capable of creating coral that can reproduce in the wild -- and contribute to a colony's genetic diversity.

RELATED Will climate change lead to food chain collapse in the ocean?
RELATED WWF: Only half as many marine animals as there were in 1970

Science News // 3 days ago
SpaceX launches Falcon 9 in Florida space coast's second launch of the day
Aug. 4 (UPI) -- Florida's Space Coast on Thursday was busier than it's been in decades, launching two separate rockets on the same day for the first time since the heyday of the Space Race.

Science News // 3 days ago
Bones age, weaken quicker with space travel, research shows
Long periods in space can irreparably damage bone structure and cause parts of the human skeleton to age as much as 10 years, new research reveals.

Science News // 4 days ago
'We're going;' NASA says it's ready for Artemis I unmanned trip to moon
Aug. 3 (UPI) -- NASA Administrator Bill Nelson, sounding like an excited new parent, declared that the agency's Artemis mission is ready to take its first physical steps to return to the moon and sometime later head to Mars.
Advertisement