Though it wouldn't be cost-effective to pave entire roads with the new conductive concrete, the material could be use in strategic locations -- like bridges or parking decks. 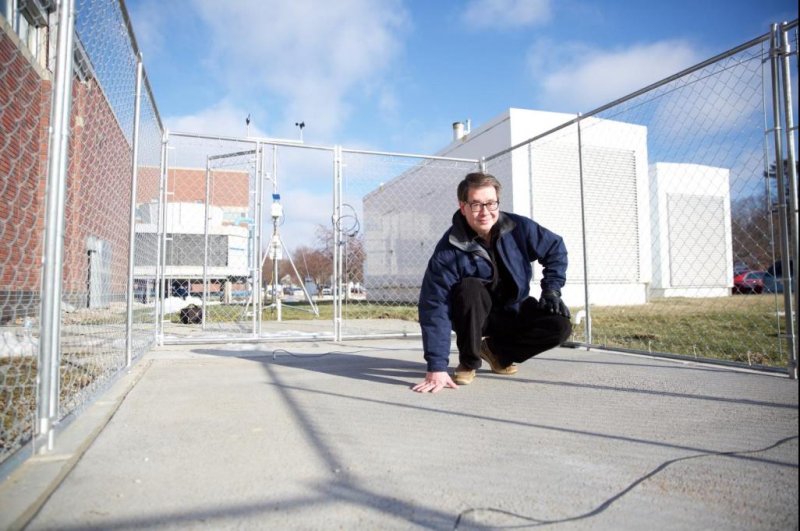 LINCOLN, Neb., Jan. 26 (UPI) -- Researchers at the University of Nebraska are testing a new type of concrete that could make clearing snow-covered streets a bit easier. The concrete is designed to carry an electric current, helping it melt snow without the help of a salt truck or plow.

The conductive concrete is made by adding carbon particles and steel shavings to a traditional asphalt mix. The additives make up just 20 percent of the mixture. Once hardened, the composite material can carry a current just strong enough to melt snow and ice while remaining safe to the human touch.

Currently, the concrete occupies a 200-square-foot space outside Nebraska's Peter Kiewit Institute, where scientists are monitoring its performance during the Midwest's winter months.

"When you use conducting concrete, the entire concrete heats up," lead researcher Chris Tuan, a professor of civil engineering at Nebraska, told National Geographic. "There is no cold area."

RELATED Scientists weave together nanomaterials for the first time

The research is supported by funding from the FAA, which is considering employing the concrete in airport tarmacs.

"To my surprise, they don't want to use it for the runways," Tuan said in a press release. "What they need is the tarmac around the gated areas cleared, because they have so many carts to unload -- luggage service, food service, trash service, fuel service -- that all need to get into those areas."

"They said that if we can heat that kind of tarmac, then there would be (far fewer) weather-related delays," Tuan said. "We're very optimistic."

Though it wouldn't be cost-effective to pave entire roads with the new conductive concrete, the material could be use in strategic locations -- bridges, high-traffic intersections, exit ramps, parking decks, driveways and sidewalks.

Sending a current through a few hundred slabs or concrete in a bridge costs much less than a truckload of salt and de-icing chemicals. Those chemicals can also prove corrosive, encouraging potholes that cost time and money to fix.

Tuan hopes to eventually install sensors that would make the concrete and its current automated, allowing an even more hands-off approach to de-icing. But it may be some time before the concrete is put to good use by municipalities.

While city governments and contractors may be wary of electric concrete, Tuan is a true believer and an early adopter.

"I have a patio in my backyard that is made of conductive concrete," he said. "So I'm practicing what I preach."