The species made its film debut only three years ago, and remains one the ocean's more elusive creatures. But the squid stuck around long enough to allow a submersible camera to briefly follow it through the water. Onlookers on a nearby pier also caught a glimpse, and a diver briefly joined the squid for a swim.

"My curiosity was way bigger than fear, so I jumped into the water and go close to it," Akinobu Kimura, owner of a local dive shope, told CNN.

Kimura helped the squid navigate its way out of the harbor.

"This squid was not damaged and looked lively, spurting ink and trying to entangle his tentacles around me," he told reporters. "I guided the squid toward to the ocean, several hundred meters from the area it was found in, and it disappeared into the deep sea."

Giant squid can grow upwards of 43 feet in length, but the red and white squid in Toyama Bay measured approximately 12.1 feet.

Giant squid, from the genus Architeuthis, typically prefer the depths of the ocean. Scientists aren't sure why the specimen showed up in the shallows of Toyama.

The 2013 video of a giant squid -- the first ever -- was also recorded in Japan. However, giant squid species have been caught or found dead all over the world, in Spain, Italy and Mexico.

Science News // 19 hours ago
Climate change in North Atlantic fuels summertime warming in Northeast U.S.
Sept. 23 (UPI) -- The Northeastern United States is warming faster than other parts of the country, according to new research published Thursday in the journal Nature Climate Change.

Science News // 22 hours ago
Banana plantations offer bats 'fast food,' but alter gut microbiomes for the worse
Sept. 23 (UPI) -- Nectar-eating bats that get most of their nutrition from banana plantations in Costa Rica boast less diverse gut microbiota than their peers living and eating in natural forest habitat. 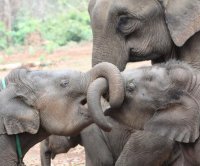