Phytoplankton paved the way for complex life on Earth

"By producing oxygen in vast quantities, these cyanobacteria enabled the development of complex life in our oceans," explained researcher Patricia Sánchez-Baracaldo.

BRISTOL, England, Dec. 1 (UPI) -- When complex life first evolved, Earth was predominantly covered by oceans. But for the first few billion years, those oceans were mostly devoid of oxygen.

It wasn't until phytoplankton, algae-like microorganisms capable of photosynthesis, colonized the ocean and filled it with oxygen that complex life began to evolve some 800 million years ago.

Researchers at the University of Bristol have been trying to figure out what took so long, seeing as photosynthesis, the ability to turn sunlight into energy, evolved some 2,700 million years ago.

RELATED Earth is less fertile without the poo of large predators

The results of her genomic analysis were published this week in the journal Scientific Reports.

Prior to 800 million years ago, cyanobacteria were mostly relegated to terrestrial and coastal ecosystems. Their populations were too small to significantly alter the planet's nutrient cycles.

"The results of this large-scale phylogenomic study imply that, early on, terrestrial cyanobacteria capable of building microbial mats dominated the ecology of the Early Earth," Sánchez-Baracaldo explained in a press release.

Because planktonic cyanobacteria first emerged in freshwater ecosystems, it took a few extra million years for these microorganisms to adapt to open ocean. But once they figured out marine life and began to multiply, the oxygenation of Earth's oceans began.

"By producing oxygen in vast quantities, these cyanobacteria enabled the development of complex life in our oceans," Sánchez-Baracaldo said. "These biological events are linked - they help explain why it took so long for complex life to evolve on our planet. Cyanobacteria needed to colonize the oceans first."

RELATED Can fertilized phytoplankton help cool the planet?
RELATED Extra CO2 a boon to plants, but only at low temperatures
RELATED Researchers find new link between ocean microbes and atmosphere

Science News // 9 hours ago
SpaceX completes first successful landing of Starship rocket
May 5 (UPI) -- SpaceX successfully launched and landed its Starship moon and Mars rocket for the first time in Texas on Wednesday.

Science News // 11 hours ago
Africa's oldest human burial uncovered in Kenya
May 5 (UPI) -- Researchers have recovered the remains of a three-year-old child buried 78,000 years ago in an ancient pit north of Mombasa, Kenya. The human burial pit, dubbed Panga ya Saidi, is the oldest yet discovered in Africa. 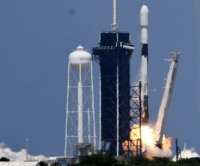