Blue Origin's New Shepherd rocket makes a successful landing after a trip to the edge of space. Photo by Blue Origin

The New Shepard rocket first took its unmanned capsule some 62 miles above Earth's surface, to the limits of the planet's atmosphere. After separating from its booster, the capsule floated back to Earth by a parachute.

The rocket maneuvered its way back toward its landing pad. At 5,000 feet, the thrusters of its BE-3 engine reignited, steadying its angle and slowing its velocity. The rocket touched down safely at a speed of just 4.4 miles per hour. The craft came to rest just a few feet from the center of the landing pad's bulls-eye.

"Rockets have always been expendable," Bezos wrote in a blog post on Tuesday. "Not anymore. Now safely tucked away at our launch site in West Texas is the rarest of beasts, a used rocket."

Rocket reusability is a much sought technology; it is expected to make space travel much more profitable for the growing private aerospace industry. SpaceX, the space company of Bezos' fellow tech entrepreneur Elon Musk, has tried and failed to land a reusable rocket three times.

"Full reuse is a game changer, and we can't wait to fuel up and fly again," Bezos said.

The latest test flight and success wasn't announced until after the fact, a sharp contrast to the media frenzies which have accompanied SpaceX's close-but-no-cigar landing attempts.

Though Blue Origin is currently teaming with United Launch Alliance to build an engine and launch vehicle for NASA's future deep space missions, the New Shepard is intended to usher in the age of private space travel and space tourism.

Science News // 2 hours ago
New Zealand schoolchildren discover new species of giant penguin
Sept. 16 (UPI) -- In 2006, a group of schoolchildren on a fossil-hunting field trip in New Zealand unearthed the bones of a giant penguin. Now, 15 years later, that flightless bird is getting a name, Kairuku waewaeroa. 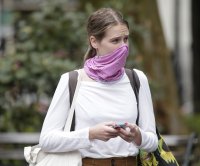 Science News // 3 hours ago
Study: Cotton towel best option for homemade face masks
If you're making your own face mask to protect against COVID-19, three layers of cotton towel fabric are best, researchers from India report.

Science News // 20 hours ago
Australian wildfires triggered giant algal blooms thousands of miles away
Sept. 15 (UPI) -- The bush fires that torched Australia in 2019 and 2020 fueled massive algal blooms a few thousand miles away in the Southern Ocean, according to a new study.