Study: Martian atmosphere being stripped away by solar winds 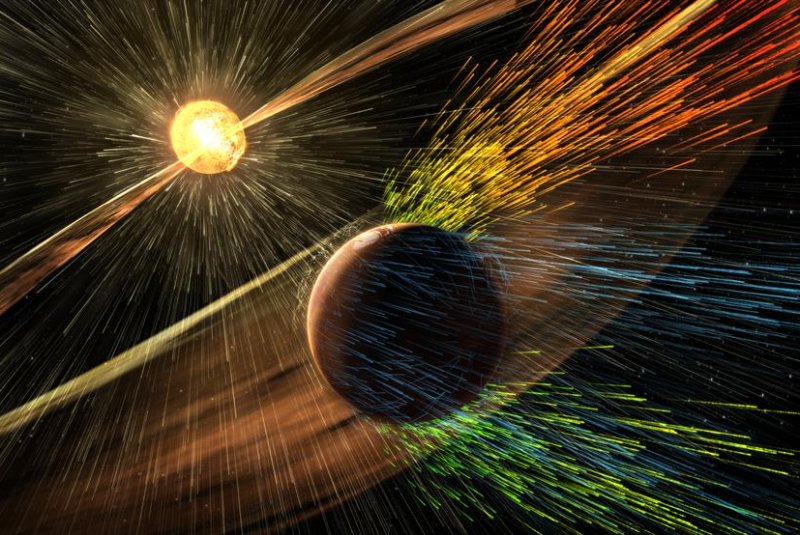 Mars was once a wet, warm world capable of hosting life. Today it's cold and dry. Over the billions of years, solar winds have slowly swept away its atmosphere.

Data, newly collected by NASA's Mars Atmosphere and Volatile Evolution, or MAVEN, mission, Mars' atmosphere deteriorates at a faster clip during the stronger solar storms. According to MAVEN, solar wind strips away a quarter pound of Martian atmosphere every second.

The atmosphere is stolen away in one of two ways. Electrons may be knocked away by solar wind, leaving charged upper atmosphere particles, which are pulled away by the magnetic fields of passing solar storms. The second way is simpler; entire atmospheric particles can be knocked into space by colliding solar particles.

"Like the theft of a few coins from a cash register every day, the loss becomes significant over time," Bruce Jakosky, MAVEN principal investigator at the University of Colorado, Boulder, explained in a press release. "We've seen that the atmospheric erosion increases significantly during solar storms, so we think the loss rate was much higher billions of years ago when the sun was young and more active."

A younger Mars may have lost its atmosphere at a more rapid pace when the sun churned out more violent and frequent storms. Unlike Earth, Mars and its atmosphere aren't protected from solar winds by a global magnetic field.

More and more evidence on the Martian surface suggests the planet once hosted significant amounts of water. Many believe it's only a matter of time before NASA's rovers find some sort of ancient microbial life on Mars.

RELATED The Internet found a Buddha statue on Mars

But explaining why and how the Red Planet became so unfriendly to life remains a challenge. The latest findings begin offer some clues.

"Solar-wind erosion is an important mechanism for atmospheric loss, and was important enough to account for significant change in the Martian climate," said Joe Grebowsky, MAVEN project scientist and researcher at NASA's Goddard Space Flight Center in Greenbelt, Maryland. "MAVEN also is studying other loss processes -- such as loss due to impact of ions or escape of hydrogen atoms -- and these will only increase the importance of atmospheric escape."

The new findings are published in the journal Science.

Science News // 2 hours ago
NASA awards contract for 3D-printed construction on moon, Mars
Nov. 29 (UPI) -- Texas-based startup ICON has landed a five-year, $57 million contract from NASA to 3D-print landing pads, roads and shelter on the moon and on Mars.

Science News // 6 days ago
Study says the heaviest flying bird seems to self-medicate with plants
Nov. 23 (UPI) -- The great bustard actively seeks out medicinal plants that can kill pathogens, according to a study published Wednesday in Frontiers in Ecology and Evolution. The study suggests the large birds may be self-medicating.