"Once again, the Pluto system has surprised us," said NASA scientist Hal Weaver. 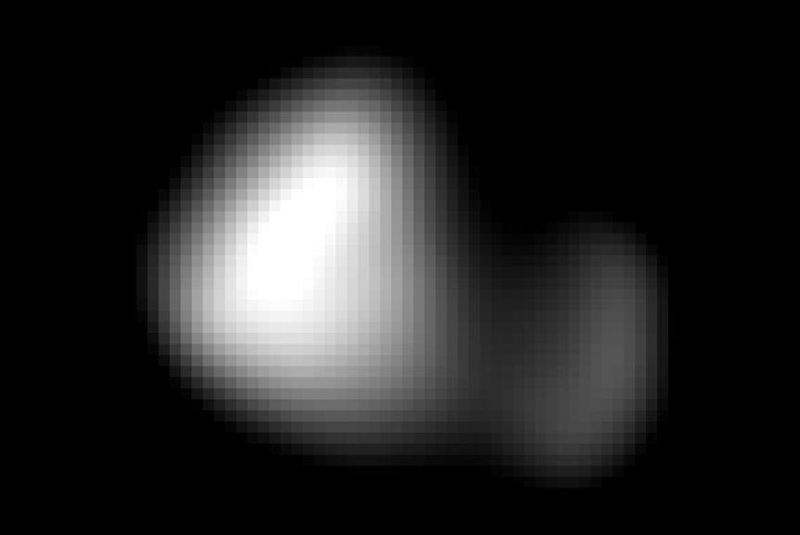 New Horizons' Kerberos image reveals the tiny moon to be much smaller and more reflective than scientists expected. Photo by NASA/JHUAPL/SwRI

The New Horizons probe has now delivered images of all of Pluto's moons. The latest is of Kerberos, Pluto's tiniest moon.

The oddly shaped moon is even smaller than scientists expected. NASA astronomers expected the moon to feature a dull, light-absorbing surface, but Kerberos' surface turned out to be highly reflective.

"Once again, the Pluto system has surprised us," Hal Weaver, New Horizons project scientist and researcher at the Johns Hopkins University Applied Physics Laboratory, remarked in a news release.

Like Pluto's other moons, Kerberos is 50 percent reflective and appears to be coated in a thin layer of clean water ice.

New Horizons imaged the moon earlier this summer, but the information was only just beamed back to NASA scientists this week. The photo was captured just seven hours prior to the probe's closest approach to Pluto.

Like Pluto's other moons, researchers believe Kerberos was formed by a collision between Pluto and another object in the Kuiper belt.

Astronomers had previously observed Kerberos using Hubble Space Telescope. Because researchers observed a strong gravitational influence on its neighbors, they predicted Kerberos to be rather large. Because it appeared so faint, scientists assumed its surface featured dark material.

"Our predictions were nearly spot-on for the other small moons, but not for Kerberos," explained co-investigator Mark Showalter, a researcher with New Horizons and the SETI Institute.

Science News // 2 hours ago
Number of unprovoked shark bites worldwide drops to 57 in 2022
It's a little safer to get into the water: Unprovoked shark attacks dropped to a 10-year low worldwide in 2022, shark watchers say.

Science News // 4 hours ago
Secret weapon in preventing next pandemic: fruit bats
Feb. 7 (UPI) -- More than four dozen Jamaican fruit bats destined for a lab in Bozeman, Mont., are set to become part of an experiment with an ambitious goal: predicting the next global pandemic.

Science News // 17 hours ago
Dire study finds 40% of animals, 34% of plants face extinction
Feb. 6 (UPI) -- Biodiversity in the United States is in a state of extreme tumult, and a study from nonprofit organization NatureServ paints a dire picture of environmental collapse.

Science News // 19 hours ago
Google to unveil new AI to compete with ChatGPT
Feb. 6 (UPI) -- Google will expand its footprint in the world of artificial intelligence with the new conversational AI technology Bard.

Science News // 2 days ago
Rise in air pollution correlates to creation of impressionist painting, study says
Feb. 4 (UPI) -- Smoggy air during the Industrial Revolution contributed to the creation of impressionism, inspiring painters such as J.M.W. Turner and Claude Monet to develop new painting styles, according to a new study.

Science News // 4 days ago
Early COVID-19 variants remain in deer populations
While COVID-19 variants Alpha, Gamma and Delta are no longer circulating among humans, they continue to spread in white-tailed deer.

Science News // 4 days ago
NASA names first person of Hispanic heritage as chief astronaut
Feb. 2 (UPI) -- Veteran astronaut Joe Acaba made history on Thursday when he was named chief of the Astronaut Office at NASA's Johnson Space Center in Houston.

Science News // 5 days ago
Astronauts use spacewalk to continue upgrade of ISS solar arrays
Feb. 2 (UPI) -- Astronauts from NASA and Japan Aerospace Exploration Agency stepped out from the International Station to begin a spacewalk early Thursday to complete work started by another work team almost two weeks ago.
Advertisement

Google to unveil new AI to compete with ChatGPT