Not only is carrion consumption down, but overall, livestock is playing a diminished role in the wolf's diet. 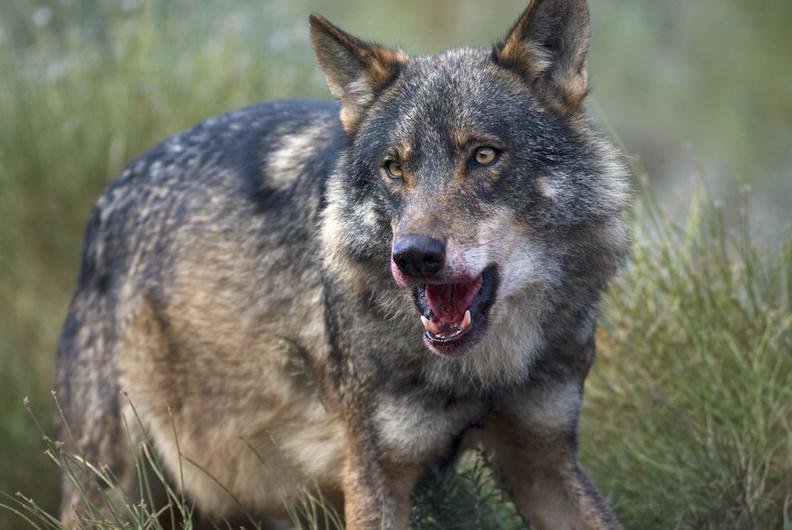 Iberian wolves have transitioned from a carrion-rich diet to one based mostly on roe deer and wild ponies. Photo by Arturo de Frias Marques/SINC/CC

Since then, researchers say the diet of the Galician wolf has changed. The reason: Europe's Creutzfeldt-Jakob disease crisis.

In the wake of mad cow disease (bovine spongiform encephalopathy) scare, regulators forbade farmers and ranchers from abandoning dead and dying animals. Most ecological research on the subject looked at the lack of carrion's effect on Europe's vultures.

But wolves were also forced to adapt.

According to researchers at the University of Santiago de Compostela, in Spain, Iberian wolves have come rely on roe deer, as well as wild boar and pony populations.

Researchers detailed their new findings in the journal Environmental Management.

Not only is carrion consumption down, but overall, livestock is playing a diminished role in the wolf's diet.

"An increasing number of roe deer and Galicia's significant wild pony population both softened the blow when cattle carrion disappeared, allowing for a change in the wolf's diet and strengthening its predatory niche," explained co-author Felipe Barcena.

Though roe deer seem to be the wolves' favorite target. In different areas, and during different seasons, the wolves turn their focus to wild boars and ponies. Conservationists are happy to see the predation of wild boars, whose growing numbers across Europe have cause a number of ecological problems.

RELATED Three Michigan wolves are the last of their kind

But while livestock attacks are down overall, those benefits have been mainly seen by goat and sheep farmers. Cattle ranchers have seen an increase in wolf attacks.

Researchers are worried this trend could complicate the protection and recovery of the once endangered Iberian wolf. Conservationists are working with ranchers to develop new management practices that might better protect cattle without harming wolf populations. Part of that process means bolstering pony and roe deer numbers, so to provide wolves with ample hunting opportunities.

"Habitat restoration work will also be needed in order to provide the wolves with a diverse and plentiful source of wild prey, which is essential if this canine population is to survive natural and artificial changes to its habitat, and if conflicts with livestock are to be reduced," the researchers wrote in their new paper.

With a strong habitat restoration effort, ecologists say farmers and ranchers could even be allowed to once again let animal carcasses be.

Science News // 1 hour ago
New study of moon rocks finds they contain gases from Earth
Aug. 11 (UPI) -- A new study of six moon rocks has discovered proof that the moon includes chemical elements from Earth's interior -- a finding that supports the theory that the moon was created when something smashed into Earth.

Science News // 2 days ago
Supermoon may outshine Perseid meteor shower
The summer of the supermoon is about to put on its final performance, stealing the spotlight from what is typically one of the most anticipated astronomical light shows of the year.

Science News // 3 days ago
Seaweed, giraffes, parrots other critical species becoming endangered, study says
Aug. 8 (UPI) -- Seaweed, which has survived on Earth in some form for 1.6 billion years, has made the list of threatened species, along with giraffes, parrots and oak trees, according to a United Nations report.