"We banded 03142 on August 5, 1977 and had no idea how very special and significant this young bald eagle would become," said retired state wildlife biologist Peter Nye. 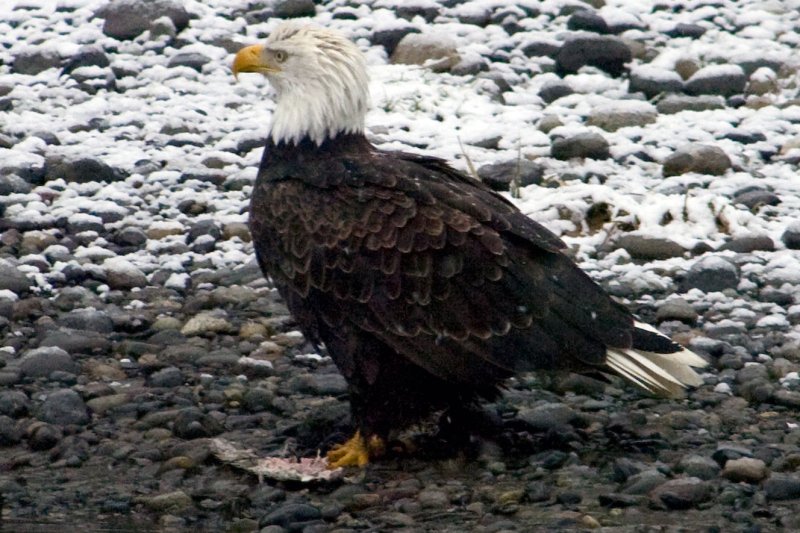 ROCHESTER, N.Y., June 17 (UPI) -- The oldest known bald eagle in the United States was found dead early this month in western New York, near Rochester. It was reportedly hit by a car.

The bird was 38, besting the previous longevity record by five years -- a sign eagle conservation efforts may be paying off.

"This record eagle is a testament to the diligent conservation and restoration work done under New York's Bald Eagle Restoration Program," Marc Gerstman, executive deputy commissioner of the New York State Department of Environmental Conservation, said in a press release.

"It's truly noteworthy that this eagle lived a long life and thrived in New York, returning to his New York nest site to continue breeding," Gerstman added. "DEC's work to conserve habitat and ensure clean air and clean water for bald eagles and many of the other fish and wildlife is ongoing, including participation in many research programs to ensure these species continue to thrive in New York State."

The eagle was born in Minnesota and brought from the Gopher State's Lake Puposky to New York's Montezuma Wildlife Restoration Program when it was just a nestling.

The eagle was first tagged at just a few months of age in Seneca Falls, in August of 1977. In 1981 it began breeding and nesting around Hemlock Lake. Researchers say the eagle became the father of many fledged eaglets over the years.

"When we banded 03142 on August 5, 1977 and had no idea how very special and significant this young bald eagle would become to our nascent bald eagle restoration program," recalled Peter Nye, retired DEC wildlife biologist who spearheaded the early restoration program. "Based on his recent recovery near this site, we have to assume he has been the resident male, breeding here for the past 34 years."

That's quite a stretch, and likely a record in itself," Nye continued. "His longevity, 38 years, although ingloriously cut short by a motor vehicle, is also a National record for known life-span of a wild bald eagle. All I can say is, hats off too you 03142; job well done!"

The bird's last moments were emblematic of his predatory prowess. A freshly caught rabbit was found near the killed eagle.

Science News // 2 days ago
Vaccine-resistant coronavirus similar to COVID-19 found in Russian bats
Sept. 23 (UPI) -- A coronavirus recently discovered in Russian bats can infect humans and may be resistant to vaccines, leading researchers to call for creating jabs to prevent against all similar viruses.

Science News // 2 days ago
Jupiter to make closest approach to Earth in 59 years
The best nights of all of 2022 to see Jupiter in the night sky are about to take place as the planet takes center stage in the night sky, a showing unlike any other in nearly six decades.

Science News // 3 days ago
Artemis I: NASA's SLS moon rocket passes key fuel test for possible launch next week
Sept. 22 (UPI) -- NASA's first Artemis mission, which will pave the way for humans to return to the moon, appears to be on track for another launch attempt next week after it passed a key test.

Science News // 4 days ago
Instrument issue pauses NASA's James Webb Telescope observations
Sept. 21 (UPI) -- Scientists have temporarily paused further observations with NASA's new James Webb Space Telescope after a problem was detected with one of its instruments, the space agency confirmed in a statement on Wednesday.

Science News // 5 days ago
Scientists discover earliest remnants of opium use
Sept. 20 (UPI) -- Scientists have discovered the earliest-known residue of opioids, according to research conducted at the University of Tel Aviv published Tuesday.

Jupiter to make closest approach to Earth in 59 years