'Socially monogamous' birds have affairs too

The mates of male birds who slept in were much more likely to look outside the nest for sex.

RADOLFZELL, Germany, June 11 (UPI) -- Songbirds have long been a propped up as a paragon of romantic commitment. They readily pair up and present a picture of idyllic monogamy to the world (or at least to ornithologists and birders).

New genetic technologies have undermined these narratives, showing songbirds are more promiscuous than previously thought. And now a new study suggests most of their affairs happen just before sunrise. The early bird gets the sperm, so they say.

"A common behavior among socially monogamous songbirds that usually takes place in the early mornings is extra-pair mating, that is copulating with partners outside of the social pair bond," scientists explained in a new scientific paper, published in the journal Functional Ecology.

To test the advantages of waking early and the disadvantages of sleeping in, researchers in Germany put slow-release melatonin implants under the skin of male great tits (Parus major), a species of passerine bird. Melatonin is a hormone that governs creatures' circadian rhythms. The implants caused the birds to sleep an extra ten minutes each morning.

Researchers closely monitored the birds sexual behavior over the course of several weeks. For birds without the implant, the control group, most males rose 22 minutes prior to dawn. Only 12 percent of these birds' female mates were sired by other males.

But for the males who hit the snooze button, their mates were much more likely to look outside the nest for sex. Some 42 percent of chicks in the nests of late-rising males were conceived with another male's sperm.

Science News // 21 hours ago
Climate change in North Atlantic fuels summertime warming in Northeast U.S.
Sept. 23 (UPI) -- The Northeastern United States is warming faster than other parts of the country, according to new research published Thursday in the journal Nature Climate Change.

Science News // 23 hours ago
Banana plantations offer bats 'fast food,' but alter gut microbiomes for the worse
Sept. 23 (UPI) -- Nectar-eating bats that get most of their nutrition from banana plantations in Costa Rica boast less diverse gut microbiota than their peers living and eating in natural forest habitat. 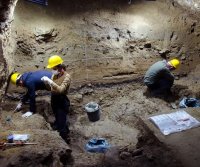