Impact glass on Mars may possess evidence of life

Researchers hope their work will inspire NASA to use future rover missions to look for life in the bottom of glass-filled craters.

A rendering shows newly analyzed CRISM data overlaid on a 3-D image of Mars' surface. The green represents the spectral signature of impact glass. Photo by NASA/JPL-Caltech/JHUAPL/University of Arizona

The findings are significant because previous research has shown that pieces of organic material can be entombed in the glass formed by meteorite impacts. Last year, Brown geologist Peter Schultz and his colleagues identified the biosignatures of plant matter in impact glass formed millions of years ago in Argentina.

"The work done by Pete and others showed us that glasses are potentially important for preserving biosignatures," Kevin Cannon, a Ph.D. student at Brown who lead the recent Martian glass survey, said in a press release. "Knowing that, we wanted to go look for them on Mars and that's what we did here. Before this paper no one had been able to definitively detect them on the surface."

Cannon and his research partners used the spectra of light reflected off Mar's surface to identify the glass. The technique is commonly used to remotely identify alien minerals and rocks, but glass is more difficult to spot as it possesses a rather weak spectral signal.

"Glasses tend to be spectrally bland or weakly expressive, so signatures from the glass tend to be overwhelmed by the chunks of rock mixed in with it," said survey co-author Jack Mustard, a professor of Earth, environmental and planetary sciences at Brown. "But Kevin found a way to tease that signal out."

Cannon recreated a mix of Martian glass and sediment in a laboratory oven and then measured its spectral signal up close. The researchers then looked for this specific signal among the data collected by the Compact Reconnaissance Imaging Spectrometer for Mars (CRISM), an instrument on NASA's Mars Reconnaissance Orbiter.

Cannon and Mustard -- who heads up the science team responsible for CRISM -- hope their work will inspire NASA to use future rover missions to look for life in the bottom of glass-filled craters.

"If you had an impact that dug in and sampled that subsurface environment, it's possible that some of it might be preserved in a glassy component," Mustard said. "That makes this a pretty compelling place to go look around, and possibly return a sample."

The survey of Mars' impact glass sites was published this week in the journal Geology. 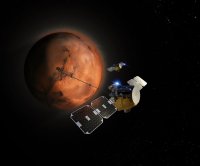