Younger rocks from Panama made their way into Colombia via land-bound rivers some 14 million years ago, proving the land bridge is older than previously thought. 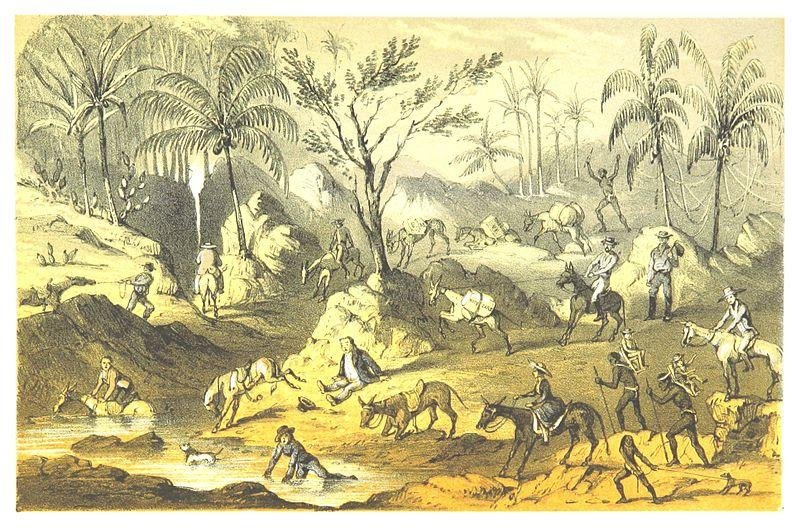 An illustration from Mountains and Molehills: or, Recollections of a Burnt Journal. ... With illustrations by Frank S. Marryat shows humans and animals crossing the Isthmus of Panama. Photo by British Library/PD

PANAMA CITY, Panama, April 28 (UPI) -- Until recently, scientists agreed the Isthmus of Panama formed some 3.5 million years ago. But now, researchers aren't so sure. New evidence suggests the isthmus may have begun forming 20 million years ago.

Previous research suggested shifts in migration, ocean and climate patterns proved the land bridge connecting North and South America was somewhere between 3 and 4 million years old. Conventional theories held the land bridge was responsible for the Great American Biotic Interchange, during which bears, cats, rodents and species of all kinds expanded their range north and south.

But while the Isthmus of Panama may have stabilized around that time, new research suggests it began forming in a stop-and-go fashion much earlier.

Scientists with Smithsonian Tropical Research Institute say they've analyzed molecules and fossils on both ends of the land bridge, and that their work suggests the two continents were connected some 20 million years ago.

The migrations of both sediment and animals were sporadic, as water occasionally washed back across shallower portions of the isthmus. But they happened, nonetheless.

The revelations are a culmination of a several different scientific studies, most of which were published in recent weeks (in the journals Science, PNAS and elsewhere).

In one study, researchers showed that younger rocks from Panama made their way into Colombia via land-bound rivers some 14 million years ago. Researchers were able to date and differentiate rock fragments by analyzing the grains of the mineral zircon present in pieces of weathered igneous. Scientists compared and contrasted the presence of differently aged zircon in both Panama and Columbia sediment layers.

"Beds younger than about 13 to 15 million years contain abundant zircon grains with a typically Panamanian age," explained Camilo Montes, former director of the Panama Geology Project at the Smithsonian Tropical Research Institute -- now a a researcher at the Universidad de los Andes, in Bogota, Colombia.

"Older beds do not," Montes added. "We think these zircons were deposited by rivers flowing from the Isthmus of Panama when it docked to South America, nearly 10 million years earlier than the date of 3 million years that is usually given for the connection."

Another study suggests deep ocean water ceased to cross the gap between the two continents around the same time, 14 million years ago. Scientists say the evidence, when taken together, is proof that other factors (not the land bridge) are likely responsible for the migratory and climatic shifts that happened roughly 3.5 million years ago.

"What is left now is to rethink what else could have caused such dramatic global processes nearly 3 million years ago," said STRI researcher Carlos Jaramillo.