"It fits well with what we know from written sources and gives us an exciting picture of how migration was done in groups with high mobility like the Vikings," said Maja Krzewinska. 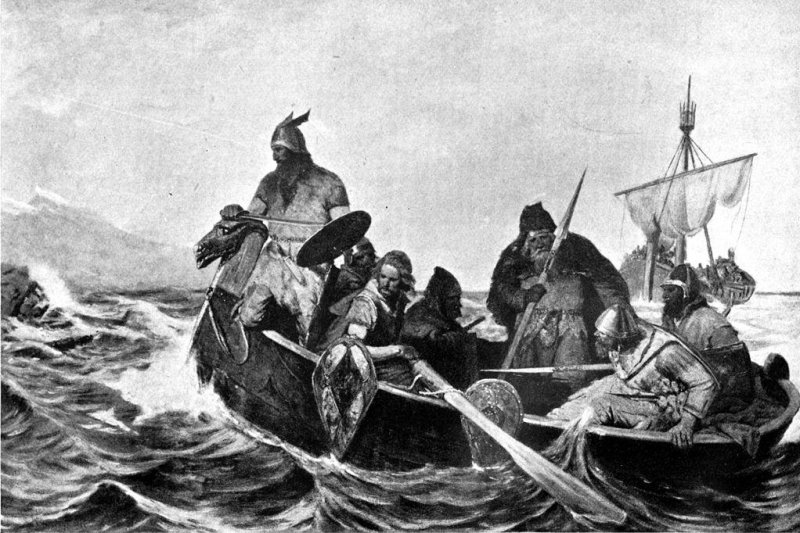 A painting depicting Norsemen in a ship. Oscar Wergeland/CC.

OSLO, Norway, Dec. 9 (UPI) -- Newly published research undermines the simplistic narrative of Vikings as a violent plunderers with a knack for sea travel. According to researchers at both the University of Oslo, in Norway, and Stockholm University, in Sweden, Vikings were family oriented and brought women along on trips to settle new lands.

Previous studies -- and popular myth -- have suggested Viking men traveled alone and then began new colonies with the assistance and cooperation of local women -- usurped, acquired or otherwise. But new analysis of mitochondrial DNA collected from 45 Norse skeletons, dated between 796 and 1066, suggest men traveled with women and children (as well as other local families) when colonizing land near Scandinavia -- like Orkney and Shetland Islands, as well as the Scottish isles.

Mitochondrial DNA offers the most detailed information on a person or people's maternal lineage. When the researchers compared the ancient Norse DNA to modern lineages they found it was more similar to DNA of the people of more remote islands, like the Shetlands, than to the DNA of Northern Europeans.

"We can also show that our Norwegian Vikings brought Norwegian women when they colonized Iceland and went to other areas," Maja Krzewinska, on of the study's researchers, said in a press release. "It fits well with what we know from written sources and gives us an exciting picture of how migration was done in groups with high mobility like the Vikings."

These latest revelations, detailed this week in the journal Philosophical Transactions of the Royal Society B, are part of a larger effort to map the genetic evolution of the Scandinavian peoples through their expansion and Viking Age diaspora.

"What we think we can see now is that the mobility and the demographic dynamics have been greater than we previously imagined," said senior study author Anders Götherstam. "But give us a few more years and I think we have a clearer picture of the demographic history in our latitudes."