"[Users] report it as one of the most profound experiences they've had in their lives," said Paul Expert. 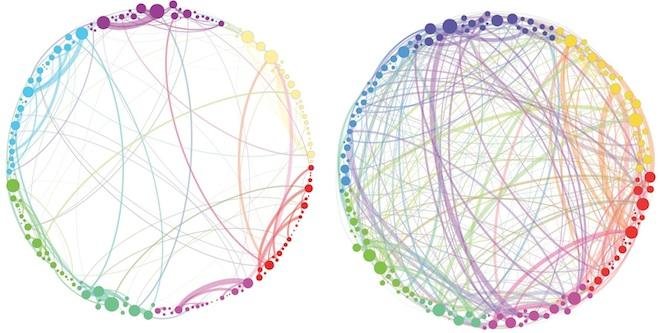 A illustrated comparison of the connections between a normal brain, on the left, and of a brain under the effects of psilocybin, on the right. (Petri et al./Proceedings of the Royal Society Interface)

LONDON, Oct. 30 (UPI) -- Many laypeople as well as scientists know the chemical that puts the "magic" in magic mushrooms is psilocybin. But how exactly does psilocybin affect the brain? What is the mechanism by which psilocybin delivers magic mushrooms' hallucinogenic and mind-bending properties?

Thanks to the work of researchers at King's College London, scientists now have better answers to these questions. Psilocybin, a new study suggests, works at least some of its magic by disrupting the brain's normal communications network, enabling connections between parts of the brain that don't typically talk to each other.

When most people think about psychedelic mushrooms, they think about vivid, oversaturated colors and everyday objects morphing into exotic creatures. But many users also recall a less definable effect, a sort of spiritual epiphany.

"[Users] report it as one of the most profound experiences they've had in their lives, even comparing it to the birth of their children," study co-author Paul Expert, a physicist at King's College, told Live Science.

This profound experience may be the result of a completely reorganized brain. In studying the effects of magic mushrooms on the brain, Expert and his colleagues found fMRI images of the brains of placebo-takers and the brains of mushroom-takers were profoundly different, with the brains of drug-takers featuring a host of regional connections not usually forged during normal neural activity.

Researchers suggest this increased brain activity could be responsible for synaesthesia, the phenomenon whereby different senses are associated with others -- tasting the color orange, feeling a melody, or seeing the smell of coffee. Synaesthesia is often associated with the high brought on by psychedelic mushrooms.

Expert and his fellow researchers hope their experiments can help them understand the potential usefulness of psilocybin in treating disorders like depression, but they also think their explorations of brain connectivity could eventually lead to answers of even larger questions.

"The big question in neuroscience is where consciousness comes from," co-author Giovanni Petri, a mathematician at Italy's Institute for Scientific Interchange, told Wired. "We don't know."

But Petri says more research like this could help them find out. Put more grandly, psychedelic mushrooms may help explain the essence of the self.

The study on psilocybin was published this week in the Journal of the Royal Society.