"If we have an exceptionally wet July, we may revise the forecast," Rich Stumpf said. "But it won’t be lower than it is now." 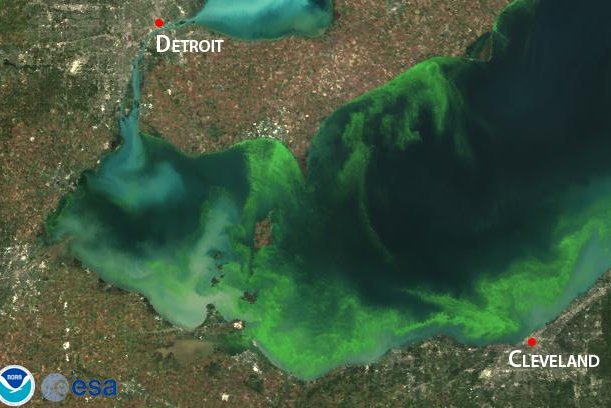 Algae bloom in Lake Erie, as seen from space. (NASA/NOAA)

CLEVELAND, July 11 (UPI) -- It's not a matter of if or when, but of how bad will it get? The question concerns Lake Erie's growing algae bloom, and the answer -- according to the National Atmospheric and Oceanic Administration -- a five or six on a 10-point scale (with ten being the worst).

The good news is the algae -- which is already beginning to suffocate Erie's shores -- won't be quite as bad as it has been the last three years. The bad news is it will still be pretty bad.

In previous years, the algae has fixated on the shores of Ohio and southern Ontario, and according to the latest prediction from NOAA, released yesterday, the toxic green slime will do so again this summer.

"The reemergence of harmful algal blooms in Lake Erie is an ecological and economic setback for communities along the coast," U.S. Rep. Marcy Kaptur, D-Ohio, said in the statement released in response to the latest reports.

At a presentation at Ohio State University's Stone Laboratory on Erie's Gibraltar Island, held to announce their algae forecast, the agency said the main culprit in this year's bloom is likely to be microcystis, a species that produces a toxin known as microcystin, which can be fatal to humans.

Since it began appearing in Lake Erie in 1995, microcystis has yet to blamed for any deaths, but it's reportedly caused sickness in swimmers and killed dozens of animals.

Research has pointed to fertilizer runoff from farming operations as one of the primary causes of the worsening algae blooms.

The algae also sucks significant amounts of oxygen from the water, making life for fish and other animals in the lake more difficult.

What's worse, the algae could increase if weather is exceptionally warm and precipitation heavy.

"Clearly, [last year's forecast] was very severely underestimated. [The 2013 algae bloom] was much worse than we expected," said Rick Stumpf, an NOAA oceanographer. "If we have an exceptionally wet July, we may revise the forecast," he said. "But it won't be lower than it is now."