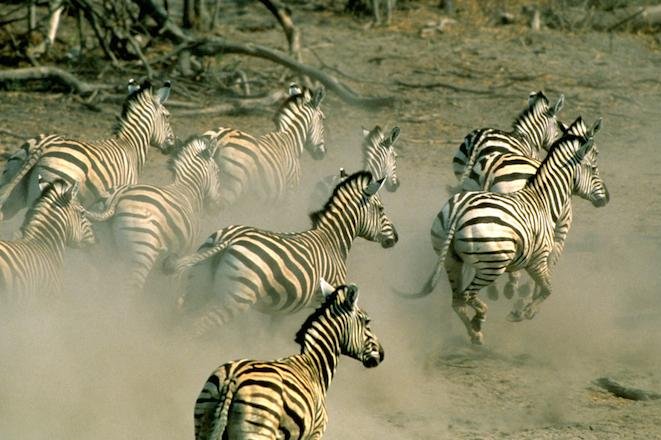 A herd of Burchell's zebras gallup through Namibia. (WWF-US/Steve Morello)

CHOBE RIVER, Namibia, May 27 (UPI) -- The Burchell's zebra, a southern subspecies of the plains zebra, travel a total of 300 miles every year from Namibia to Botswana and back.

It's the longest terrestrial migration in Africa, a surprise to biologists who assumed the various mammalian herds of the Serengeti were responsible for the lengthiest season trek.

Biologists discovered the sheer enormity of the zebras' feat by attaching GPS collars to eight adult zebras. The tracking devices allowed senior conservation scientist Robin Naidoo and his colleagues at the World Wildlife Fund to follow the herd from the floodplains of the Chobe River in Namibia to the grasslands of Botswana's Nxai Pan National Park.

Nearly as surprising as the grand distance was the almost arrow-like straight line the zebras followed. "This is a 500-km (311-mile) round trip journey along an almost direct north-south axis," explained Naidoo.

The discovery of the record-breaking migration is detailed in the latest edition of the online journal Oryx. Naidoo's study was aided by Namibia's Ministry of Environment and Tourism, as well as scientists from Elephants Without Borders and Botswana's Department of Wildlife and National Parks.

Though the study and its impressive subject make for a good headline, it's not simply about getting in the record books.

"Sorting out how animals make these individual decisions has important conservation value," ecologist Mark Hebblewhite, of the University of Montana, told National Geographic. "There is a global decline in migratory species. If we know what makes animals stop migrating, maybe we can reverse or maintain these movements."

One obstacle is humans and their byproducts: fences, buildings, cities, roads.

As human development increasingly stands in the way of long established migration routes, biologists and conservationists will need to be resourceful -- and will rely on such accrued knowledge to work with Africa's government to accommodate large mammals on the move.

It is, in fact, governmental cooperation between countries like Botswana and Namibia that allow for the record-breaking migration.

The entire migration takes place within the boundaries of a composite of protected areas called the Kavango-Zambezi Transfrontier Conservation Area (KAZA).

"Massive protected areas like KAZA are in fact quite necessary to conserve these large-scale ecological phenomena," Naidoo said. "The effective on-the-ground management of KAZA will be a key factor in determining whether [they] persist."