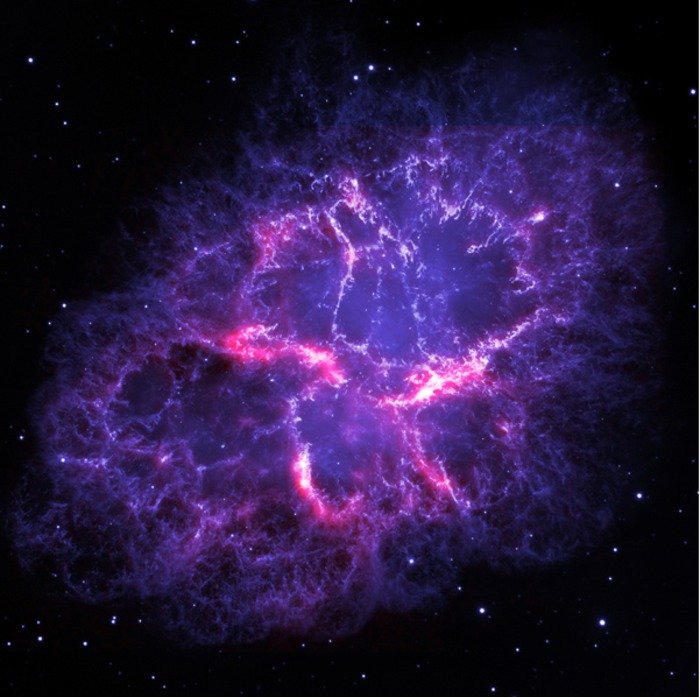 This image shows a composite view of the Crab nebula, an iconic supernova remnant in our Milky Way galaxy, as viewed by the Herschel Space Observatory and the Hubble Space Telescope. Credit: NASA/ESA

PASADENA, Calif., Dec. 13 (UPI) -- Argon, a gas termed a loner for its refusal to bond with other elements, has been seen linked with a chemical partner in a distant nebula, U.S. astronomers say.

In the Crab Nebula, the remains of an exploded star, astronomers have found the first evidence of such a compound in space, a molecule called argon hydride, NASA's Jet Propulsion Laboratory in Pasadena, Calif., reported Thursday.

Argon, like helium and neon and a few others, is one of the so-called noble gases, named for their reluctance to bind in compounds with more common elements.

"The strange thing is that it is the harsh conditions in a supernova remnant that seem to be responsible for some of the argon finding a partner with hydrogen," JPL scientist Paul Goldsmith said.

The discovery was made in spectral data from the Herschel space observatory, a European Space Agency mission with important NASA contributions.

"This is not only the first detection of a noble-gas based molecule in space, but also a new perspective on the Crab nebula," ESA Herschel project scientist Goran Pilbratt said.

"Herschel has directly measured the argon isotope we expect to be produced via explosive nucleosynthesis in a core-collapse supernova, refining our understanding of the origin of this supernova remnant," he said.