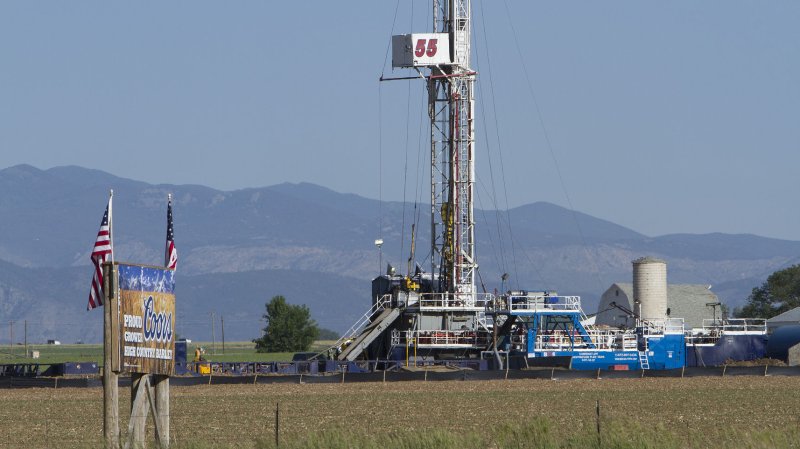 An oil rig stands on farmland that grows barley for Coors Brewery at the Niobrara oil shale formation in Colorado. Gas and oil companies are using large amounts of water to obtain shale oil and gas in a process called hydraulic fracturing or fracking. UPI/Gary C. Caskey | License Photo

Even in regions not predisposed to earthquakes, filling wells with waste injection fluids can lead to dangerous tremors, scientists say.

The wells are at greater risk for small quakes triggered by larger tremors after being filled with waste produced by oil and gas fields.

The waves open new passageways for fluids to get into faults and weaken them, he said. For decades, sites in Oklahoma, Texas and Colorado have practiced wastewater well injection. Tremors there came as early as six months after injection. Volcanic activity has been known

Further research may change how companies to decide where dispose of wastewater for geothermal plants and other drilling rigs where water is pumped underground, like in shale gas fracking, based on the risk for earthquakes.

"We need to be able to tell operators how many gallons of water they can pump into the ground in a particular location and how many earthquakes that will produce," said Emily Brodsky.

Scientists had already discovered that pumping water underground causes small earthquakes. But now, they say the quakes could be more intense than expected, with magnitudes of 4 or 5.

Brodsky said there is a direct correlation between the amount of water extracted and injected into the ground and the number of earthquakes.

Earthquakes aren't the only risk, though.

The EPA just dropped a study of depositing waste from fracking that was alleged to be contaminating water in Wyoming. At first, the EPA began studies to ensure that groundwater was safe despite fracking. Amid questions of its methodology, the EPA has ended its study and decided not to release the data collected.

Science News // 4 hours ago
'Cannibal' solar burst headed for Earth could make northern lights visible in U.S.
Aug. 18 (UPI) -- A plume of "dark plasma" from the sun is expected to be overtaken by a "cannibal" solar burst that may cause an aurora display visible throughout large portions of the United States on Thursday.

Science News // 17 hours ago
Spacewalk cut short by equipment failure
Aug. 17 (UPI) -- A Russian astronaut's spacewalk outside the International Space Station was cut short Wednesday after experiencing an electrical problem with his suit.

Science News // 21 hours ago
Northern lights could glow over northern U.S.
Wednesday night will feature the rare opportunity to see the glow of the aurora from the United States, but cloudy conditions could obscure the sky during the height of the celestial light show.

Science News // 21 hours ago
National Academy of Sciences sanctions White House climate official for ethics violation
Aug. 17 (UPI) -- The U.S. National Academy of Sciences has sanctioned White House official Jane Lubchenco, and barred her from working on publications or programs for the academy for five years, for violating its ethical code of conduct.