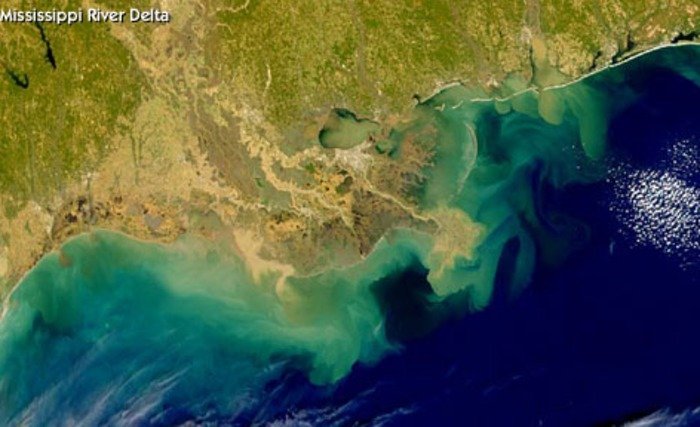 NEW ORLEANS, April 9 (UPI) -- A water pollution problem in the Gulf of Mexico doesn't come from oil rigs but from farm fields a thousand miles away in the U.S. Midwest, scientists say.

Often overshadowed by events like the 2010 Deepwater Horizon disaster, rainstorms and resulting runoff of agricultural fertilizers are a growing factor in increasingly severe water quality problems in the gulf and the creation of so-called Dead Zones, an expert said.

"The Dead Zone is a vast expanse of water, sometimes as large as the state of Massachusetts, that has so little oxygen that fish, shellfish and other marine life cannot survive," oceanographer Nancy N. Rabalais told a meeting of the American Chemical Society in New Orleans. "The oxygen disappears as a result of fertilizer that washes off farm fields in the Midwest into the Mississippi River.

"Just as fertilizer makes corn and soybeans grow, it stimulates the growth of plants in the water -- algae in the Gulf. The algae bloom and eventually die and decay, removing oxygen from the water. The result is water too oxygen-depleted to support life."

The Dead Zone is getting larger and more desolate, Rabalais said, with lower concentrations of oxygen dissolved in the water, and the gulf also seems to be more sensitive to the nitrogen and phosphorous fertilizers that wash down the Mississippi River and the Atchafalaya River today than it was in the past.

The amounts of phosphorus fertilizer compounds in the Lower Mississippi have doubled and nitrogen compounds have tripled over the last 50 years, Rabalais warned, noting oxygen levels in the Dead Zone have declined in parallel.