CHAMPAIGN, Ill., Feb. 15 (UPI) -- U.S. entomologists say they've discovered a tiny grasshopper-like insect in Belize and named it in commemoration of a Mayan people who once lived there.

Researchers have dubbed the tiny hopper Ripipteryx mopana after the Mopan people, a Mayan group native to the Central American region.

Scientists from the University of Illinois discovered the new species in the tropical rainforests of the Toledo District in southern Belize, which is bordered by Guatemala.

"Belize is famous for its biodiversity, although very little is known about the insect fauna of the southern part of the country. This is particularly true of the Orthoptera -- the grasshoppers, crickets and katydids," entomologist Sam Heads said in a university release Wednesday.

"The new insect is the first representative of its family ever to be found in Belize," Heads said.

"Given the amount of high quality habitats in the region, it isn't really surprising that new species still await discovery, especially in the less-explored areas."

Science News // 4 hours ago
Russia, U.S. plan to make more movies in space
Sept. 27 (UPI) -- Russia and the United States are ready to cross new frontiers for filming movies in space as a way to promote growing commercialization of orbital spaceflight and beyond. 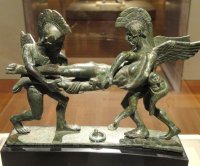