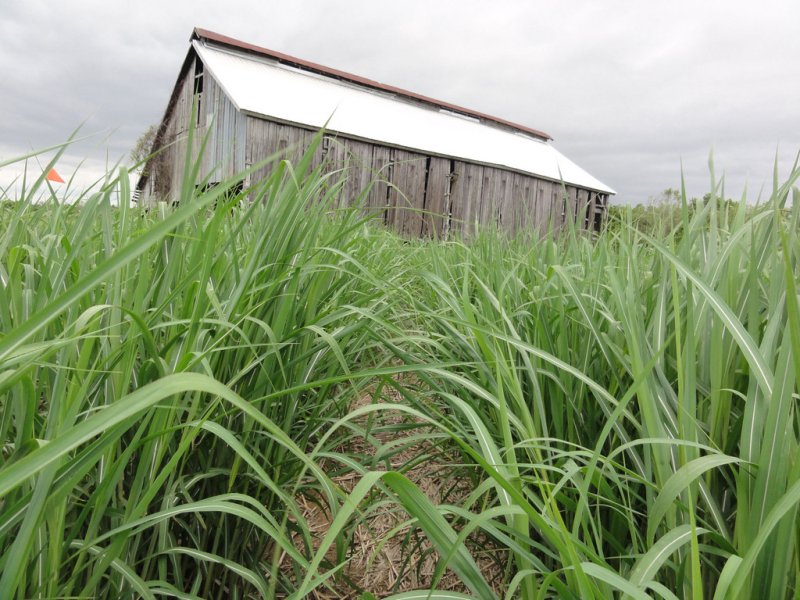 Miscanthus growing in a field. Credit: University of Georgia

ATHENS, Ga., Feb. 10 (UPI) -- Studies of the genome of Miscanthus, a large perennial grass, could speed the development of biofuels derived from the plant, U.S. researchers say.

Changsoo Kim, a researcher at the University of Georgia, identified a set of approximately 600 bits of Miscanthus DNA that can serve as diagnostic tools to identify genes that can make the plant an even better biofuel crop.

"What we are doing right now is taking the same individual plants that were used in the genetic map and measuring their height, flowering time, the size of their stalks, the dimensions of their leaves and how far they have spread from where they were planted," said Andrew Paterson, who heads the Georgia's Plant Genome Mapping Laboratory.

"And then one can use pretty straightforward statistics to look for correlations between bits of DNA and a trait."

Miscanthus is a natural candidate for biomass farming, researchers said, with its sugarcane-like stalks growing to more than 12 feet in height even in soil of marginal quality.

It needs very little fertilizer and grows well in moist temperate climates across the United States, Europe and Asia.

Researchers said the DNA research would allow breeders to build on Miscanthus' natural strengths and remove some of its weaknesses as a potential biofuel source.

For example, a significant challenge to producing Miscanthus for biomass in the southeastern United States is that it tends to flower too soon.

"You don't want it to flower," Paterson said in a University of Georgia release Friday. "You'd like it to keep making leaves and stalks and not bother with reproduction. Nature tells it not to do that."

The genetic map will allow the identification of genes responsible for flowering and prevent it from happening too early in the growing season, he said, leaving farmers with tall, hearty plants that will yield the most biomass possible.

Science News // 1 day ago
New asteroid expected to make very close pass to Earth this evening
Jan. 26 (UPI) -- Earth is set for a very close shave with a small asteroid Thursday just five days after it was discovered by an amateur astronomer in Crimea, according to NASA's Jet Propulsion Laboratory.

Science News // 3 days ago
NASA, DARPA partner for nuclear space rocket test
Jan. 24 (UPI) -- NASA is partnering with the Defense Advanced Research Projects Agency to demonstrate the use of a nuclear thermal rocket engine in space, the two agencies announced in a statement Tuesday.

Science News // 4 days ago
NASA delays Rocket Lab launch in Virginia until Tuesday
Jan. 23 (UPI) -- NASA on Monday scrubbed the Rocket Lab's launch of its Electron rocket from Virginia because of poor weather conditions, moving the possible liftoff to Tuesday.