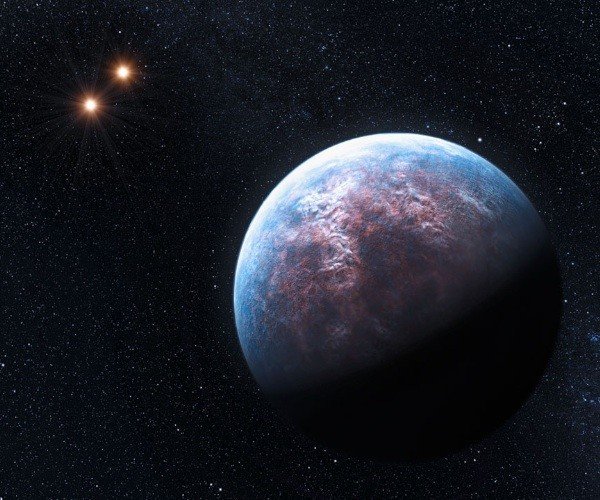 An artist impression of the Gliesse 667 system. A new planet orgbiting the star GJ 667C is at least 4.5 times as massive as Earth, which makes it a so-called super-Earth. (HO/ESO.org)

SANTA CRUZ, Calif., Feb. 2 (UPI) -- A newly discovered planet orbiting in the habitable zone around a distant star is the best candidate yet observed for supporting life, U.S. astronomers say.

Scientists say the planet orbiting the star GJ 667C is the best candidate yet for harboring water, and possibly even life, on its surface, because it sits in the circumstellar region neither too hot nor too cold for liquid water to exist on the planet's surface.

"It's the Holy Grail of exoplanet research to find a planet around a star orbiting at the right distance so it's not too close where it would lose all its water and boil away, and not too far where it would all freeze," Steven Vogt, an astronomer at the University of California, Santa Cruz, told SPACE.com. "It's right smack in the habitable zone -- there's no question or discussion about it. It's not on the edge, it's right in there."

The planet, dubbed GJ 667Cc, is at least 4.5 times as massive as Earth, which makes it a so-called super-Earth, researchers said.

Its host star is a member of a system of three stars, they said.

"The planet is around one star in a triple-star system," Vogt said. "The other stars are pretty far away, but they would look pretty nice in the sky."

RELATED Most 'Earth-like' planet yet is discovered

"Statistics tell us we shouldn't have found something this quickly this soon unless there's a lot of them out there," Vogt said. "This tells us there must be an awful lot of these planets out there. It was almost too easy to find, and it happened too quickly."