Naming the spacecraft mapping the moon's gravity field was a nationwide school contest that began in October.

Nearly 900 classrooms with more than 11,000 students from 45 states, Puerto Rico and the District of Columbia participated, NASA said in a release Tuesday.

The wining names for the spacecraft, formerly the Gravity Recovery And Interior Laboratories or GRAIL-A and -B, were submitted by a class from an elementary school in Bozeman, Mont.

"The 28 students of Nina DiMauro's class at the Emily Dickinson Elementary School have really hit the nail on the head," said Maria Zuber, GRAIL principal investigator from the Massachusetts Institute of Technology in Cambridge, Mass.

"We were really impressed that the students drew their inspiration by researching GRAIL and its goal of measuring gravity. Ebb and Flow truly capture the spirit and excitement of our mission."

The GRAIL mission is managed by NASA's Jet Propulsion Laboratory in Pasadena, Calif.

Science News // 9 hours ago
Watch live: Cosmonauts make spacewalk to prepare Russian segment of ISS
ORLANDO, Fla., Jan. 19 (UPI) -- Two Russian cosmonauts are working outside the International Space Station during the first spacewalk of 2022 to perform tasks that will allow spacecraft to dock with a new Russian segment of the orbiting laboratory. 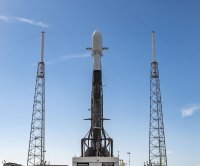 Private investment in space infrastructure hit record $14.5B in 2021