Researchers at Brown University say the massive flows inundated a region that would cover nearly 60 percent of the area of continental United States.

Ever since the Mariner 10 mission in 1974 took the first pictures of Mercury, people have been intrigued by smooth plains covering parts of the surface, with some planetary scientists suspecting volcanic activity.

"For more than 35 years we have been uncertain about the role of volcanic activity on Mercury," said James W. Head III, professor of geological sciences at Brown University.

Now data from NASA's orbiting Messenger spacecraft show huge volumes of lava poured from cracks in Mercury's surface in the area of its north pole, flooding the surrounding, low-lying plains "like a bathtub," Head said.

The volume would have been enough to bury the state of Texas in a layer of lava more than 4 miles deep, the researchers said.

They said Messenger will allow them compare volcanic activity around the north pole with other regions that experienced volcanism.

"This one deposit is so huge," Head said, "volcanism has got to be important elsewhere." 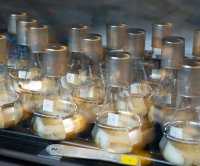