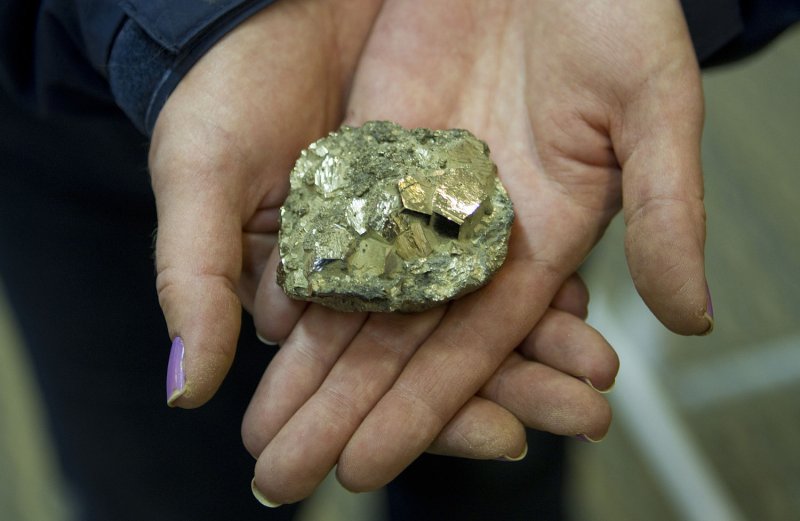 BRISTOL, England, Sept. 7 (UPI) -- Precious metals in Earth's mantle are the result of a bombardment of meteorites more than 200 million years after the planet was formed, U.K. researchers say.

As the Earth formed, molten iron sank to its center to make the core, taking with it the vast majority of the planet's precious metals such as gold and platinum.

That movement to the core should have left the crust and mantle without any appreciable reserved of the precious metals, researchers at the University of Bristol said, but precious metals are tens to thousands of times more abundant in the Earth's silicate mantle than anticipated.

Researchers say they believe the presence of abundant amounts of gold and other precious metals is due to a massive meteor shower that struck Earth well after the core had formed.

Matthias Willbold and Professor Tim Elliott of Bristol University analyzed rocks from Greenland that are nearly 4 billion years old that provide a unique window into the composition of our planet shortly after the formation of the core.

Differences in certain metal isotopes in the ancient rocks compared with modern day rocks strongly support the theory that the excess of accessible gold on Earth is the fortunate byproduct of meteorite bombardment, Willbold said.

"Our work shows that most of the precious metals on which our economies and many key industrial processes are based have been added to our planet by lucky coincidence when the Earth was hit by about 20 billion billion tons of asteroidal material," he said in a university release Wednesday.

Science News // 7 hours ago
Oldest DNA shows Greenland once was home to forested ecosystem
Dec. 7 (UPI) -- DNA sequences dating back 2 million years, the oldest ever obtained, suggest that the northeastern tip of Greenland was once home to a forested ecosystem unlike any now found on Earth.

Science News // 9 hours ago
Australian researchers find 100 million-year-old fossil in Queensland
Dec. 7 (UPI) -- Australian paleontologists said on Wednesday they have discovered the complete skeleton of an ancient large, long-necked marine reptile in the Queensland desert that is about 100 million years old.

Science News // 13 hours ago
Mars to disappear behind final full moon of 2022
A cosmic vanishing act is about to unfold in the night sky as the full moon passes directly between the Earth and one of its planetary neighbors  Wednesday night.

Science News // 1 day ago
Archaeologist claims human relative used controlled fire for light, cooking
Dec. 6 (UPI) -- South African archaeologists say they have proof that a close relative of humans used fire for both light and cooking meat, despite having a much smaller brain than ours.

Science News // 2 days ago
Artemis I's Orion flies close to moon ahead of return to Earth
Dec. 5 (UPI) -- NASA's Orion spacecraft has completed a close flyby of the moon on Day 20 of the Artemis I mission as the capsule prepares to return to Earth.

Science News // 2 days ago
Body of last Tasmanian tiger found in museum cupboard
Dec. 5 (UPI) -- Researchers in Australia have located the preserved remains of the last-known Tasmanian tiger, after they were misplaced for decades.