PARIS, May 23 (UPI) -- Satellites tracking the eruption of an Icelandic volcano are providing essential information to assess possible hazards to aviation, officials say.

Authorities with the European Space Agency say satellites have been monitoring the Grimsvotn volcano in southeast Iceland, dormant since 2004, since it started erupting Saturday, closing Iceland's airspace, an ESA release said Monday.

Just over a year ago, the eruption of Iceland's Eyjafjallajoekull volcano caused chaos for European aviation and led to the cancellation of hundreds of flights for safety concerns.

Although the Grimsvotn eruption is larger, it is unlikely to cause the same degree of disruption because the ash plume is being injected much higher into the atmosphere.

"It was initially an ash-rich eruption that was also very wet," said Fred Prata from the Norwegian Institute for Air Research, who is also a leader of ESA's Support to Aviation for Volcanic Ash Avoidance project. "A large amount of ash has fallen out, mostly in the proximity of Iceland.

"The volcano has also emitted a lot of sulphur dioxide that has been spreading north and northeast. Because this has been a high eruption there is less likelihood that it will affect continental and European aviation," he said.

"Things could change if there is more volcanic activity -- so it is important to monitor the ongoing eruption." 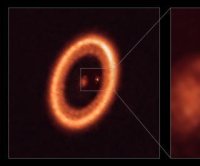