NEWCASTLE, England, May 17 (UPI) -- Mass extinctions of marine life during prehistoric times is a warning the same could happen again due to high levels of greenhouse gases, U.K. researchers say.

Scientists at Newcastle University have used core samples drilled from the ocean bed off the coast of western Africa to study "greenhouse oceans," those that have been depleted of oxygen with increases in carbon dioxide and temperature.

Studying layers of sediment from 85 million years ago, they found a significant evidence of ancient marine life buried within de-oxygenated layers of the sediment, a university release said Tuesday.

The finding has relevance for our modern world, one researchers said.

"We know that 'dead zones' are rapidly growing in size and number in seas and oceans across the globe," Newcastle professor Thomas Wagner said. "These are areas of water that are lacking in oxygen and are suffering from increases of CO2, rising temperatures, nutrient run-off from agriculture and other factors."

Their evidence points to a mass mortality in the oceans at a time when the Earth was going through a greenhouse effect.

"What's alarming to us as scientists is that there were only very slight natural changes that resulted in the onset of hypoxia in the deep ocean," Martin Kennedy of the University of Adelaide said.

"This occurred relatively rapidly -- in periods of hundreds of years, or possibly even less -- not gradually over longer, geological time scales, suggesting that the Earth's oceans are in a much more delicate balance during greenhouse conditions than originally thought, and may respond in a more abrupt fashion to even subtle changes in temperature and CO2 levels."

Science News // 1 hour ago
Human screams can convey at least six different emotions
April 14 (UPI) -- Scientists have underestimated the communicative abilities of the human scream, according to a new study. 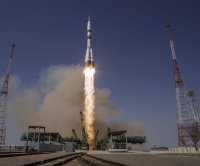