SHEFFIELD, England, April 13 (UPI) -- British and U.S. researchers say fossilized remains found near a Scottish lake illuminate a key moment in the history of evolution of life on land.

Scientists from the University of Sheffield, the University of Oxford and Boston College say the fossils highlight an important step in the history of evolution when life made the leap from tiny, simple bacterial (prokaryote) cells toward larger, more complex (eukaryotic) cells that would make photosynthesis and sexual reproduction possible, a Sheffield release said Wednesday.

Some of these ancient fossils from nearly a billion years ago are so large and complex they suggest a surprisingly early start for the emergence of complex eukaryote cells on land, the researchers said.

"It is generally considered that life originated in the ocean and that the important developments in the early evolution of life took place in the marine environment: the origin of prokaryotes, eukaryotes, sex and multicellularity," Charles Wellman of Sheffield said.

"We have discovered evidence for complex life on land from 1-billion-year-old deposits from Scotland. This suggests that life on land at this time was more abundant and complex than anticipated," he said. "It also opens the intriguing possibility that some of the major events in the early history of life may have taken place on land and not entirely within the marine realm." 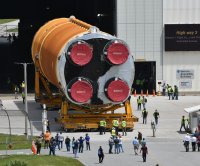