NEW YORK, July 12 (UPI) -- The farmed salmon industry is threatened by a virus often fatal to the fish, U.S. researchers say, and they fear it could spread to populations of wild salmon.

Heart and skeletal muscle inflammation was first detected in salmon on a farm in Norway in 1999, and has now been found in more than 400 fish farms in Norway as well as in the United Kingdom, ScienceDaily.com reported Monday.

Researchers say they worry the disease could spread to wild fish coming close to farm pens or coming in contact with farm fish escaping from them.

The virus-caused disease "is a threat to aquaculture and it has the potential to spread to wild salmon," W. Ian Lipkin of Columbia University's Mailman School of Public Health said.

Farmed fish are an increasingly important food source with a global yearly harvest of 110 million tons growing at more than 8 percent a year, ScienceDaily.com said.

Science News // 22 hours ago
New NOAA study finds increase in Atlantic hurricanes linked to cleaner air
Researchers examined how particulate air pollution, or aerosols, and climate change have affected tropical cyclones across the planet over the past 40 years in a new study. 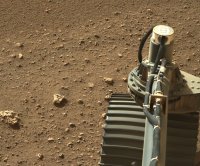