Professor Ruud van der Weel and Audrey van der Meer of the Norwegian University of Science and Technology say they determined infants' ability to see whether an object is approaching on a direct collision course, and when it is likely to collide, develops around the time they become more mobile.

An approaching object on a collision course projects an expanding image on the retina. Looming stimuli create waves of neural activity in the visual cortex in adults. The scientists said they investigated how, and where, an infant brain extracts and processes information about imminent collision.

They said they found infants' looming-related brain activity clearly took place in the visual cortex. The more mature infants were able to process the information much quicker than the younger infants.

The scientists said their findings suggest there are well-established neural networks for registering impending collision in 10- to-11-month-old infants, but not yet in five- to seven-month-olds. For the eight-to nine-month-old infants, they are somewhere in between.

The study is detailed in the online edition of the journal Naturwissenschaften.

Science News // 3 hours ago
Newly named species of early human could help explain evolutionary gaps
Oct. 28 (UPI) -- The link that anthropologists hoped would neatly bridge the gap between apes and humans likely doesn't exist. Human evolution, it turns out, looks more like a "braided stream" than an inclined plane of improving posture. 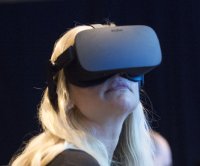