Scientists led by Purdue University Associate Professor Noah Diffenbaugh developed what they described as one of the most complete climate modeling programs in the world to identify hot spots based on the magnitude of temperature and precipitation response to greenhouse gas emissions.

"It's estimated there will be a global warming of 1 to 6 degrees by the end of the century, and we examined how this could manifest at smaller spatial scales and within shorter time periods," said Diffenbaugh. "We identified areas likely to be most responsive to changes in greenhouse gas emissions."

He said since the study provides information at the state level, the findings could impact governmental decisions as states, enter into emissions agreements such as the Midwest Greenhouse Gas Accord.

"One interesting and surprising result is that we see the same hot-spot patterns even at lower greenhouse gas concentrations," Diffenbaugh said. "This suggests we may be able to see these hot spots emerging already."

The findings of the National Science Foundation-funded research will be published in an upcoming issue of the journal Geophysical Research Letters. 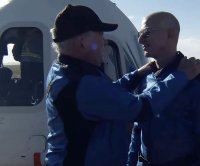 Science News // 3 days ago
Half of all space travelers deal with back pain, study says
Back pain could turn out to be a major problem for the growing number of space travelers, and learning more about it could also benefit Earth-bound back patients, researchers say.