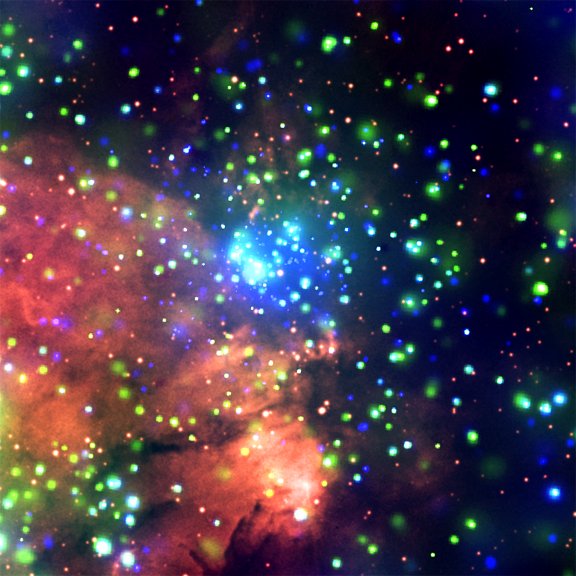 U.S. astronomers have discovered the Milky Way has just two major arms of stars, not the four arms of the current model. This NASA image was taken by the Chandra X-ray observatory and shows the W3 region of the Perseus arm of the Milky Way galaxy where many massive stars are forming in a string of stellar clusters, located about 6,000 light years from Earth. (UPI Photo/NASA) | License Photo

WHITEWATER, Wis., June 4 (UPI) -- U.S. astronomers have discovered the Milky Way has just two major arms of stars, not the four arms of the current model.

Led by Robert Benjamin of the University of Wisconsin-Whitewater, the scientists based their conclusion on an evaluation of 800,000 images of an expansive swath of the Milky Way taken by the National Aeronautics and Space Administration's Spitzer Space Telescope.

Benjamin and his colleagues used Spitzer's infrared detectors to determine the small arm of the galaxy in which our solar system resides extends farther from the center of the galaxy than previously thought. A subsequent count of stars and measurements of stellar densities revealed the two-arm structure.

"For years, people created maps of the whole galaxy based on studying just one section of it, or using only one method," said Benjamin. "We will keep revising our picture in the same way that early explorers sailing around the globe had to keep revising their maps."

The findings were presented Tuesday in St. Louis during the 212th meeting of the American Astronomical Society.