Editor's Note: Planners in NASA's Exploration Directorate recently gave United Press International an exclusive briefing on the steps they envision to fulfill President Bush's new vision for space exploration. These steps include designing the vehicle to fly back to the moon as well as the new fleet of atomic-powered spacecraft that may open up astronaut visits to deeper in space. In Part 2, NASA attempts to develop a new nuclear rocket and power system that could shrink the time it takes astronauts to travel through the solar system -- as well as boost power for a whole new generation of space probes and moon bases.

WASHINGTON, July 30 (UPI) -- To send astronauts back to the moon, NASA is planning to begin by making maximum use of existing U.S. and foreign rockets as launching systems. Vehicles under consideration may use updated propulsion systems that could blast a flotilla of spacecraft from the Earth to the vicinity of the moon.

For voyages of longer duration, however -- to Mars and possibly even more distant destinations -- NASA is designing a whole new system for both space propulsion and space power. If successful, the system could provide future astronauts a swifter means of voyaging far beyond the moon and equip their ships and robotic scouts with far more electrical power than ever has been available to space missions before.

Named for the Greek God that gave humans fire, Project Prometheus was first announced in 2002, well prior to President Bush's space exploration proposals.

Prometheus originally was conceived as a revamped package under NASA's Nuclear Systems Initiative. It was intended to develop and flight-demonstrate an advanced, atomic-powered space vehicle. The vehicle, which NASA prefers not to call a rocket -- rather, a nuclear electric propulsion system -- might be able to triple the speed at which spacecraft travel beyond the Earth.

The heart of the Prometheus research effort -- a $3 billion project planned across five years -- would be a set of power systems evolved from the powerplants and electric thrusters carried aboard existing space probes.

Instead of conventional rockets, which start out with a maximum thrust of short duration, a nuclear-electric space vehicle would fly away from Earth slowly, then gradually increase its speed via continuous, long-lasting thrust from relatively small, electric engines.

NASA periodically has studied such engines for deep space use, but to date has not developed or flown them as the main propulsion system for probes or spacecraft. Their only use has been to control the orbital position of Earth satellites.

Nevertheless, NASA planners seem excited by the potential of Prometheus as a source of greatly increased power, and they are studying two alternative power systems.

One would be an advanced version of the radioisotope thermoelectric generators currently in use aboard probes such as the Cassini spacecraft, which currently is orbiting Saturn.

Cassini employs three such generators to produce electricity for the probe's four-year mission around the Saturnian system, but the maximum amount of power the trio can generate is only 30 volts, with an output of about 870 watts.

The second technology is a nuclear fission reactor power system. The technology, never outfitted on to U.S. spacecraft, could yield a massive increase in a spacecraft's electric power. Planners liken such an advance to the difference between a 100-watt electric light bulb and a lighted baseball stadium.

Officially, all that NASA predicts is a spacecraft using a fission reactor for its power would have 100 times more electricity as a probe without it. That much power would allow scientists to carry much more advanced instrumentation aboard the probes of the future.

"We asked the scientific community, 'what could you do if you didn't have (today's) restrictions on power?,'" NASA Administrator Sean O'Keefe told UPI. The answer was to build and fly space probes that would be of an order of magnitude above today's craft.

-- Perform exquisitely detailed detailed photo-reconnaissance of the giant planets -- Jupiter, Saturn, Uranus and Neptune -- as well as their many moons.

-- Rendezvous with comets in space, subjecting them to detailed inspection and collecting samples to return to Earth.

-- Carried aboard a Mars lander, NFRs could increase by many times the number of instruments set down on the surface, as well as the complexity and capability of the mission, the distance traveled on the surface and, possibly, allow the transport of a piece of the red planet back to Earth.

-- Aboard deep-space robotic expeditions to the farthest edges of the solar system, they would power investigations of Pluto, the Kuiper Belt and perhaps even the mysterious Oort Cloud.

Using the solar power to provide electricity to spacecraft would not work at such great distances. The power of sunlight at Saturn, for example, is only 1 percent of its strength at Earth.

NASA already is planning deep-space missions that a Prometheus power system might enable. Last spring, a team of researchers studying a mission to the moons of Jupiter began the process of evaluating the kinds of instruments they might want to place aboard the flight.

Called the Jupiter Icy Moons Orbiter, or JiMO, the spacecraft would move in and out of orbit around three of Jupiter's moons -- Callisto, Ganymede and Europa -- powered by the Prometheus reactor and its electrical propulsion engines.

Using the electricity generated by the reactor, JiMO would be capable of adjusting its orbit to aim its advanced, power-hungry cameras and instruments at features it found interesting on the Jovian lunar surfaces.

In addition to demonstrating the NFR concept, JiMO would attempt to scout the moons for their ability to sustain life, map their surfaces or penetrate sub-surface oceans with advanced space radar, and conduct studies of the chemical composition of the surfaces or the depth and make up of ice covering their liquid oceans.

JiMO also would study the radiation surrounding the moons, as well as their magnetic fields.

Among the instruments being evaluated for the mission -- which would not be launched before 2011 -- are new types of space radars, magnetometers, infrared imagers and high-resolution cameras, as well as new equipment to study the atoms and dust in space near each of the planetary bodies.

Still, just getting JiMO aloft will be difficult for NASA.

"Prometheus will be a challenge," said Mike Lembeck, in charge of requirements for NASA's Exploration System Directorate.

When completely deployed in space, JiMO and its Prometheus power and propulsion system will be more than 100 feet long. Currently, Lembeck said, there are no existing space boosters capable of lifting the JiMO package into space as a complete unit -- NASA's preferred plan.

"So, we may have to launch in two or three pieces," Lembeck said. NASA also might have to assemble JiMO robotically, he added.

Interest in a heavy-lift rocket may drive the booster choices for the moon-Mars program, because the heavy-lifting space shuttle fleet is scheduled to be retired by 2010.

If NASA opts for a big cargo booster for JiMO, it might also employ the vehicle in the planned human assault on the moon and Mars.

The Prometheus reactor also is being eyed to power lunar and Martian expeditions and bases, Lembeck said.

"The JiMO mission is a way to test out this technology" for later use in the manned landings, he explained.

Thus, NASA's new, space-going hot rod will be getting its early workouts powering new generations of robotic space probes, but it ultimately will find its home with humans, providing light, heat and power on other worlds.

Science News // 1 hour ago
Genomic data illuminates origin, legacy of the Etruscans
Sept. 24 (UPI) -- Before the Roman Empire, the Italian peninsula was dominated by another sophisticated confederation, the Etruscans. After centuries of debate, new genomic analysis has offered fresh insights into their origins. 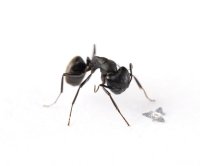 Science News // 2 days ago
Winged microchip is the world's smallest human-made flying structure
Sept. 22 (UPI) -- Engineers at Northwestern University have shrunk a microchip to roughly the size of a grain of sand and given it the power of flight.

Science News // 2 days ago
98% of videos hashtagged '#alcohol' on TikTok portray drinking in a positive light
Sept. 22 (UPI) -- Half of all TikTok users are between the ages of 16 and 24, and 7 in 10 teens say they regularly use TikTok. The authors of a new study are concerned all those young people are getting the wrong impression of alcohol.
Advertisement