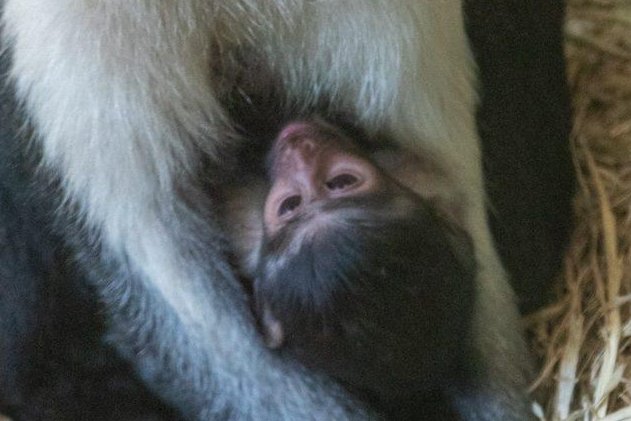 Aug. 10 (UPI) -- Zookeepers at a U.K. zoo arrived at work to an unexpected surprise -- a newborn Diana monkey.

The Paignton Zoo in Paignton, U.K., heralded the arrival of the baby Diana monkey on Tuesday morning, zoo officials said. The baby was only a few hours old when it was discovered by zookeepers.

This morning our keepers were welcomed with a very special surprise... a baby Diana monkey that was just a few hours old! The baby is the first of the Endangered species to be born at Paignton Zoo in over 10 years. Full story: https://t.co/DQacUGI56W @WildPlanetTrust pic.twitter.com/ybYMdv2kfu— Paignton Zoo (@PaigntonZoo) August 9, 2022

The zoo also released a short video of the baby, where it can be seen cuddling up to its mother and exploring its surroundings.

Born to mother Akea -- who herself was born at the Paignton Zoo in 2006 -- the unnamed baby is the first to be born at the zoo in over a decade. The sex of the newborn has not yet been announced.

Zookeepers knew that Akea was pregnant, zoo officials said, but were not sure when she would give birth -- Diana monkeys typically have a gestation period of five months, but it was unclear when Akea first got pregnant.

"Our Dianas are an important part of the breeding program, so being greeted by Akea and her baby this morning was exciting for the whole team," said Lisa Britton, the mammal curator at Paignton Zoo. "This was a really special opportunity to see the hours-old baby with its mother."

Akea is part of a European-led effort to continue breeding Diana monkeys.

An Old World monkey found in the jungles of the Ivory Coast, Sierra Leone and Libera, Diana monkeys typically live at all levels of the forest canopy.

They are also known for their wide range of vocalizations used to signal their partners.

The species remains one of the rarest and most endangered primates in the world, according to the zoo, with the monkeys being threatened by "extensive deforestation for logging and charcoal production, as well as by poaching for their meat and skin."

Due to the fact that Diana monkeys are typically larger than other monkey species, they are often sought after by hunters for their larger bounty of meat.

The New England Primate Conservancy (NEPC) estimates that the Diana monkey has lost 30% of its primary habitat over the past few decades, with the species' population "suspected to have undergone a decline of 50% or more over this time period."

Despite significant conservation efforts, including the marking off of protected areas, the logging industry and deforestation efforts in West Africa remain prominent.

This has helped ensure that Diana monkeys remain endangered.

Odd News // 14 hours ago
Truck crash covers California highway in candy
Oct. 3 (UPI) -- Halloween came early to a California highway, when a crash involving two trucks caused one of the vehicles to lose its load of candy in the roadway.

Odd News // 14 hours ago
Unscratched lottery ticket worth $300,000 spent days in oblivious winner's car
Oct. 3 (UPI) -- A South Carolina man said a scratch-off lottery ticket sat forgotten and untouched in his car for two days before he discovered it was a $300,000 winner.

Odd News // 17 hours ago
Man jumps rope from sitting position for Guinness World Record
Oct. 3 (UPI) -- An accomplished rope-jumper in Bangladesh with multiple world records earned another title for an unusual variant of the sport that involved sitting on the ground.

Odd News // 17 hours ago
Bear visits California home to eat trash, swim in pool
Oct. 3 (UPI) -- A bear paid a visit to a California home and was caught on camera feasting on trash and taking a dip in the house's backyard pool and hot tub.

Odd News // 20 hours ago
Moose rescued from Connecticut fence
Oct. 3 (UPI) -- Environmental conservation officials in Connecticut responded to a property where a moose was stuck with one side of its body on either side of a fence.