Venomous snake stows away 4,000 miles from Pakistan to England 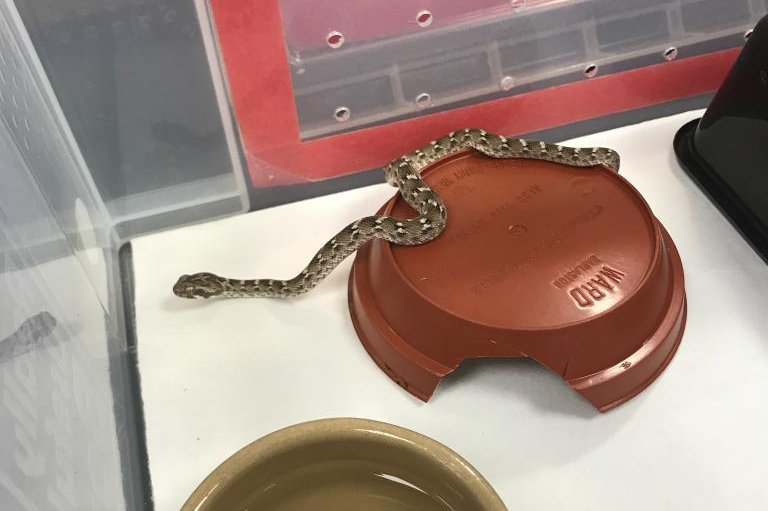 A saw-scaled viper, a highly venomous species of snake, was found in a shipment of bricks that arrived in Manchester, England, after a 4,000-mile journey from Pakistan. Photo courtesy of the RSPCA

Dec. 22 (UPI) -- Animal rescuers in Britain said they rescued a highly venomous snake that stowed away from Pakistan to England in a shipment of bricks.

The RSPCA said workers at Manchester, England, business Manchester Brick Specialist spotted the saw-scaled viper in a container of bricks that had been shipped in from Pakistan the previous month.

Logistics manager Michael Regan used a cardboard box to confine the snake and contacted the RSPCA, which dispatched Inspector Ryan King to the scene.

"The report came to us that a saw-scaled viper had been spotted but I was a bit skeptical," King said in an RSPCA news release. "Sometimes we get to jobs like this and it turns out to be a harmless grass snake -- we have even attended snake reports which turn out to be plastic toys."

King said he quickly discovered the workers had been right about the serpent.

"I only had to take a quick look to realize we were dealing with a reptile which was more than capable of killing people with its highly toxic venom," he said.

King took the viper to a facility with a special license for handling venomous snakes.

"It was quite an honor to deal with this snake and I am pleased he has a home where he will be looked after," he said. "It is amazing that he survived a 4,000 mile journey and managed to live for weeks -- and in such a cold climate when arriving in England."

Odd News // 3 hours ago
Huge waterspout churns offshore as lightning flashes
At 6 a.m. CDT Tuesday, Boo Freeman filmed a massive waterspout off the coast of Destin, Fla., about 50 miles east of Pensacola, before most people had their first cup of coffee.

Odd News // 22 hours ago
Squirrels are 'splooting' all over New York City
Squirrels in New York City parks have been spotted sprawled out on their stomachs with their arms and legs stretched out during very warm days, or splooting, as it's less commonly known.

Odd News // 23 hours ago
Dog rescued after being lost in Missouri cave for up to 2 months
Aug. 15 (UPI) -- A team of spelunkers working to map a Missouri cave ended up rescuing a dog that may have been lost underground for up to two months.

Odd News // 23 hours ago
Oregon couple's winning lottery ticket shredded by dogs
Aug. 15 (UPI) -- Oregon Lottery officials said they were able to reconstruct an $8 winning scratch-off ticket that was torn to shreds by the winner's dogs.

Bear scales barbed-wire fence at Air Force base in Florida