Oct. 1 (UPI) -- A New York couple whose wedding plans were interrupted by border closings from the COVID-19 pandemic held a ceremony at the U.S.-Canada border so the bride's parents and grandmother could attend.

Karen Mahoney and Brian Ray, ski instructors who live in Cadyville, N.Y., said they were hoping the Canadian border would reopen in time for their wedding when they planned it for September, but they had to come up with a new plan when the date approached and crossings remained banned.

Mahoney, who met Ray 35 years ago when he taught her how to ski, said it was important to her that her parents and 96-year-old grandmother, who live in Quebec, attend her wedding.

"She's my only living grandparent, the only grandparent I've ever known, so it was very important for me for her to be there to watch the happiest day of my life," Mahoney told CNN. "The most important part of the day for us was the promises we told to each other, and we wanted my parents and grandmother to witness that."

Ray contacted a man he identified as "Border Brian," a childhood friend who earned his nickname by joining the Border Patrol. Brian arranged for the couple to hold a wedding ceremony at the Jamieson Line Border Crossing, where Burke, N.Y., meets Quebec.

"He was off-duty at the time and ... let the other agents who were on duty know what was going to transpire," Mahoney told CBS News. "He arranged so that it would be uninterrupted."

The couple said the rules for the ceremony included each attendee staying on their own side of the border and no objects being passed across the line.

Mahoney said her grandmother was overjoyed to be able to attend.

"She was extremely excited," the bride said. "I've seen her once in two years. So, it was very emotional; we both cried. And she expressed to me later that to witness the happiest day of my life is a moment she would never forget."

Mahoney's father, Paul Mahoney, said getting to attend the wedding from across the border was the next best thing to being able to walk her down the aisle.

"We would not have missed it. Not for the world," he told WTPZ-TV.

The couple held their originally planned ceremony the next day in New York with the rest of their guests.

"I got to marry the most beautiful woman in the world two days in a row," Ray said.

Odd News // 14 hours ago
Louisville Zoo announces birth of Hartmann's mountain zebra
May 18 (UPI) -- The Louisville Zoo in Kentucky announced the birth of a healthy female foal to a 6-year-old first-time mother.

Odd News // 14 hours ago
Baby born aboard Frontier Airlines plane in Florida
May 18 (UPI) -- Frontier Airlines announced on social media that a passenger on a flight headed to Florida gave birth in the air with help from a flight attendant.

Odd News // 15 hours ago
Electric car drifts for 27.12 miles, breaks world record
May 18 (UPI) -- A Chinese car company broke a Guinness World Record when one of its electric cars drifted for 27.12 miles on a wet surface. 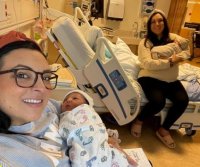 Odd News // 18 hours ago
Wisconsin man marks 50 years of daily Big Mac meals
May 18 (UPI) -- A Wisconsin man who earned a Guinness World Record for most Big Macs eaten in a lifetime celebrated another milestone: 50 years of eating a Big Mac nearly every day. 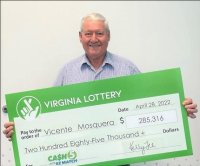