Toni James of Wichita, Kan., won $20,000 on the first Mega Millions ticket she ever purchased. Photo courtesy of the Kansas Lottery

Aug. 23 (UPI) -- A Kansas woman who decided to buy her first-ever Mega Millions ticket said a group of numbers randomly chosen by her friend ended up winning her a $20,000 prize.

Toni James, of Wichita, told Kansas Lottery officials she has played Powerball and Lotto America in the past, but decided to buy a Mega Millions ticket for the first time during an Aug. 13 stop at the QuikTrip gas station in Wichita.

She said she was excited to discover she had matched four numbers and the Mega Ball in the Aug. 13 drawing, but she didn't know she had won $20,000 until she went to claim her prize.

"I didn't even know how much I won until Thursday night when I asked the retailer to cash me out, and she told me I had to go to Topeka to claim my prize," she said.

James spread the word to her family members, but one relative needed some extra convincing.

"I had to send him a picture of the ticket for him to believe me," she said.

The player said she plans to use her winnings to pay off bills and other debt. 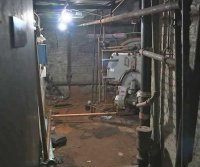 Odd News // 17 hours ago
Home of off-Broadway's 'Perfect Crime' temporarily closed due to crime
Jan. 25 (UPI) -- An off-Broadway play appropriately titled Perfect Crime had to cancel performances due to a real crime -- someone stole the copper pipes from the theater's basement.