Former members of England's Hoylake Rugby Club, which disbanded in 2001, reunited to play a game of touch rugby for 33 hours, 33 minutes and 33 seconds to break a Guinness World Record and pay tribute to teammate Dan Miller, who died of a heart attack in June 2020. Photo courtesy of Guinness World Records

July 19 (UPI) -- Former members of an English rugby club reunited to play a world record-breaking 33-hour game to pay tribute to a teammate who recently died.

The team beat the previous record of 30 hours, 3 minutes and 11 seconds, which was set by Keele University in 2017.

The Hoylake players said the record attempt was planned as a tribute for Dan Miller, a member of the team who died of a heart attack in June 2020 at the age of 43.

"Our reasons for taking this on were more than just achieving a world record, which of course is the icing on the cake," Hoylake player Trevor Boult told Guinness. "It's also been about us being able to show Dan's family what he meant to us, as our much-loved teammate and friend whilst achieving something out of the ordinary in his memory."

The "DoItForDan" game raised funds for WaterAid, Miller's favorite charity. The team received messages of support from numerous celebrities and sports figures, including actor Daniel Craig, who is also a former member of the Hoylake Rugby Club. 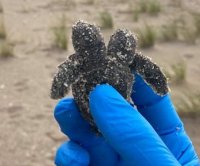