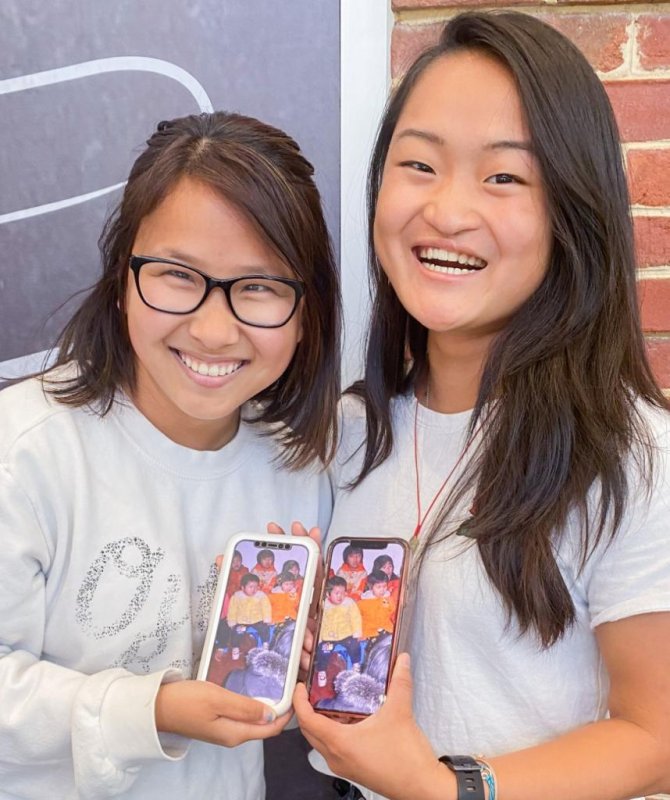 Liberty University students Ally Cole (L) and Ruby Wierzbicki struck up a conversation on a bus on the school's Virginia campus and discovered they lived in the same Chinese orphanage at the same time when they were small children. Photo courtesy of Liberty University

April 26 (UPI) -- A pair of students at a Virginia university struck up a conversation on a bus and soon discovered they lived at the same orphanage in China 15 years earlier.

Ally Cole, a sophomore at Liberty University in Lynchburg, sat down next to freshman Ruby Wierzbicki on a bus crossing the school's campus and the two students struck up a conversation.

The photos showed the same orphanage.

"We held the photos side by side on our phones and we realized that everything matched, and we knew that it had to be the same place," Wierzbicki said in a Liberty University news release.

The students determined they had been adopted one week apart, at the ages of 6 and 4, and even had photos showing them together at the facility.

"We started scrolling through our photos on our phones, and I realized that Ruby had a lot of photos of me that I'd never seen before and photos where we were together," Cole said. "We even had a mutual friend from the orphanage, Emma, that we each had photos with."

"One of the photos was one that we both had, with us standing next to each other, and I hadn't known who the girl next to me was, but now I know," she said.

The students said they don't believe their meeting on the bus was mere happenstance.

"There are people I've talked to about this and they've said, 'What a coincidence.' But we think that this is 100% God," Wierzbicki said. "There's no way that two people who were in the same orphanage in a different country can somehow end up at the same school at the same time and have it not be God."

Odd News // 15 hours ago
Pakistani man, 70, breaks world record by crushing apples with his hand
May 25 (UPI) -- A 70-year-old Pakistani man broke a Guinness World Record by using his hand to crush 21 apples in one minute.

Odd News // 15 hours ago
High school principal takes care of 12 horses, citing old Montana law
May 25 (UPI) -- A Montana high school principal had "his work cut out for him" when 12 students rode their horses to school -- and, in accordance with an old law, he had to take care of them.

Odd News // 15 hours ago
Jumping worms, the evil twin of earthworms, showing up in California
Gardeners beware -- the invasive Amynthas agrestis, also known as the Asian jumping worm, could be wiggling around a garden near you. These worms are known for their ability to jump a foot in the air.

Odd News // 18 hours ago
German surfer rides world record 86-foot wave in Portugal
May 25 (UPI) -- A German surfer broke the Guinness World Record for riding the largest wave -- an 86-foot monster off the coast of Portugal.

Odd News // 19 hours ago
Firefighters rescue 6-foot pet snake from tree
May 25 (UPI) -- Firefighters in Alberta were called out to perform an "unusual animal rescue" when a resident's 6-foot snake escaped and climbed 15 feet up a tree.