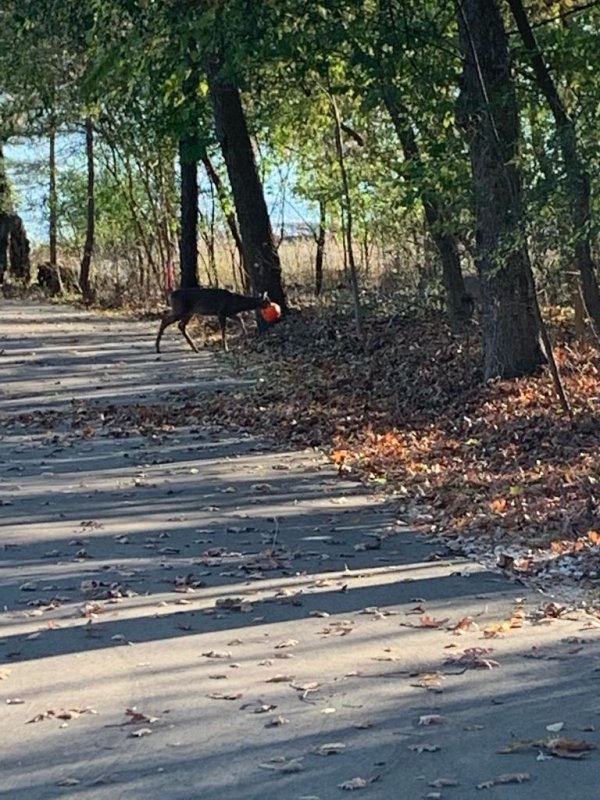 Animal rescuers in Wisconsin said a deer spotted wandering for several days with a plastic Halloween pumpkin stuck over its face was rescued with help from Pewaukee residents. Photo courtesy of the Humane Animal Welfare Society of Waukesha County

Nov. 5 (UPI) -- Animal rescuers in Wisconsin said a deer that had been spotted wandering for several days with a plastic trick-or-treat pumpkin stuck over its face was freed with help from local residents.

The Humane Animal Welfare Society of Waukesha County said it first received reports of the deer with the Halloween pumpkin stuck over its face Oct. 29, and neighbors living near the lake in Pewaukee were asked to keep a lookout for the deer emerging from the nearby woods.

HAWS personnel were summoned to the neighborhood when the deer was seen Tuesday and rescuers rushed to the scene to tranquilize the deer.

The deer was secured and the pumpkin was removed with the help of neighbors. The animal was released back into the wild.

Odd News // 17 hours ago
Ontario man collects his second big lottery prize in under a year
Sept. 20 (UPI) -- An Ontario man welcomed his second dose of lottery luck when he scored a $78,000 prize less than a year after winning $39,000.

Odd News // 18 hours ago
Florida woman's lost dog turns up on Facebook nearly a year later
Sept. 20 (UPI) -- A 15-year-old dog that went missing from his owner's Florida home was reunited with the woman nearly a year later when she spotted his photo on an animal rescue's social media page.

Odd News // 19 hours ago
Escaped sheep lead Texas officers on highway foot chase
Sept. 20 (UPI) -- A pair of sheep got loose from their pen in Texas and led animal care officers on a foot chase that at one point ended up on a busy highway.

Odd News // 20 hours ago
Ghost town remnants emerge from drought-stricken Utah reservoir
Sept. 20 (UPI) -- Drought conditions in a Utah reservoir led to the revealing of an unusual piece of the state's history -- the remnants of a ghost town.