Oct. 6 (UPI) -- A 102-year-old Chicago woman is gaining attention online thanks to a viral photo showing her decked out in personal protective equipment to cast her vote by mail.

The Chicago Teachers Union tweeted a photo showing Bea Lumpkin, 102, a retired member of the union, dressed from head to toe in PPE as she dropped her ballot into a mailbox.

Lumpkin said she has never missed an election in her life. She said she considers this to be the most important one of her lifetime.

"The most important reason to vote in this election is that there's so much at stake, more than any other vote I've cast, because of the great challenge to the survival of our democracy," Lumpkin told CNN. 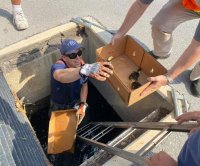