The New York Police Department said the deer was first spotted around noon Tuesday running loose through the Gravesend neighborhood.

Police pursued the deer through the borough for more than two hours before it was tranquilized in a resident's yard. A video from the scene shows officers carrying the deer to a waiting truck on a stretcher.

Police said the animal had likely swam to Brooklyn from Staten Island, which has a large population of the animals.

The deer was taken to a forest preserve on Staten Island and released. 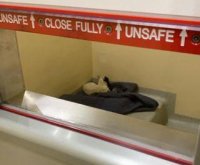 Odd News // 15 hours ago
Lost lamb spends the night in Irish jail cell
April 19 (UPI) -- Police in Ireland said a lost lamb found wandering loose in a roadway spent the night in a jail cell before being reunited with its owners.

Odd News // 16 hours ago
Florida firefighters rescue ducklings from storm drain
April 19 (UPI) -- Firefighters in Florida came to the rescue of a family of ducklings who fell into a storm drain near a bridge. 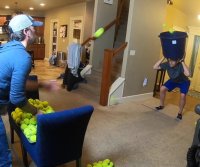 Odd News // 17 hours ago
Idaho man catches balls with bucket on his head to reclaim Guinness title
April 19 (UPI) -- A pair of Idaho men reclaimed a Guinness World Record when one of them caught 107 tennis balls in an oversized bucket placed on his head in one minute.

Odd News // 17 hours ago
Monitor lizard rescued from busy Singapore road
April 19 (UPI) -- A pair of police officers in Singapore were caught on camera rescuing a giant monitor lizard that wandered out into a busy road.