Aug. 31 (UPI) -- A Florida angler broke a state record when he reeled in a flathead catfish that tipped the scales at 69.9 pounds.

The 69.9-pound catfish, which measured 48.5 inches long, beat the previous record of 69.3 pounds, which was set in 2019 by angler Marvin Griffin, whose catch also came from the Yellow River.

"I've caught some good ones before this fish, but none of them were more than 54 pounds," Nowling said. "I've been fishing since I was old enough to hold a pole and have been fishing on Yellow River as long as I can remember." 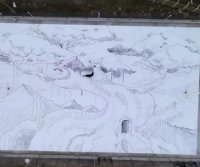