June 11 (UPI) -- A Florida family captured video of an alligator trespassing on their property and taking a dip in their backyard swimming pool.

Carlos Rivera said he had to convince his family he wasn't pranking them when he alerted them to the gator swimming in the pool behind their Hillsborough County home.

"I noticed there was a gator in there. I told everybody, but everybody thought I was just joking," Rivera told WFTS-TV.

Rivera and his daughter, Veronica, called for backup from Veronica's boyfriend and decided to handle the trespasser without calling wildlife authorities for help.

"We saw him walking around for a while and we were wondering who we should call like my dad said and then we decided it's probably best because it was a baby alligator so we thought we could handle it," Veronica Rivera said.

The group scooped the gator up in a garbage bin and released it in a nearby pond where alligators are known to reside.

"My boyfriend is from Missouri so he doesn't get much of this, he has like bears and stuff. He always thought the Florida stuff was a joke, but now he knows it's for real," Veronica Rivera said. 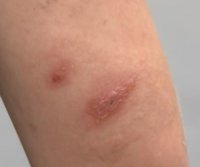