London police said officers responding to a report of a big cat with cheetah-like markings in an affluent neighborhood discovered the animal was a Savannah cat, a hybrid of a domestic cat and an African serval. Photo by 272447/Pixabay.com

May 26 (UPI) -- Police responded to an affluent London neighborhood on a report of a "big cat" with cheetah-like markings and determined the animal was a domesticated Savannah cat.

Residents of the area unofficially known as Billionaire's Row, located in the Hampstead Heath-East Finchley area of London, called police Monday night to report a big cat was on the loose.

"It was elongated, really too big for a domestic pet. The markings were like that of a cheetah or leopard," a resident who spotted the feline told the London Evening Standard.

An armed police unit was dispatched to the neighborhood and an animal expert accompanying the officers was able to catch a glimpse of the animal and identify it as a Savannah cat, a domesticated hybrid of a domestic cat and an African serval.

Police said the animal escaped into the undergrowth before they could capture it. The cat, which is believed to have escaped from a home in the area, remained at large Tuesday.

Odd News // 44 minutes ago
Clerk reopens store for woman who buys $1M lottery ticket
June 16 (UPI) -- A Michigan woman said she would not have been able to purchase the scratch-off lottery ticket that earned her a $1 million jackpot if a store clerk hadn't unlocked the closed door so she could shop.

Odd News // 2 hours ago
Duck family waddles into New York bagel shop
June 16 (UPI) -- A New York man who helped a mother duck and her eight ducklings cross a busy road captured video of the moment the family of birds strolled into a Brooklyn bagel shop.

Odd News // 2 hours ago
Nevada firefighters rescue trapped teen from home's chimney
June 16 (UPI) -- Firefighters in Nevada conducted an unusual rescue when a teenager who found herself locked out of her home tried to climb down through the chimney and became stuck. 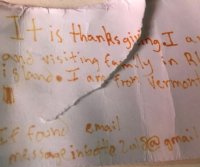 Odd News // 23 hours ago
Maryland woman uses lottery winnings to buy $100,000 payout ticket
June 15 (UPI) -- A Maryland woman who once claimed two $500 lottery prizes in a single day said she used some winnings from a minor prize to buy a ticket that earned her a $100,000 jackpot.

Odd News // 23 hours ago
Painting bought for $4.09 at thrift shop identified as David Bowie original
June 15 (UPI) -- A painting purchased for less than $5 at a Canadian thrift store is now up for auction after the artist was identified as music legend David Bowie.
Advertisement